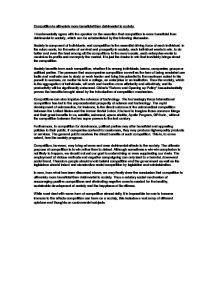 Competition is ultimately more beneficial than detrimental to society. I fundamentally agree with the speaker on the assertion that competition is more beneficial than detrimental to society, which can be substantiated by the following discussion. Society is composed of individuals, and competition is the essential driving force of each individual. In the micro scale, for the sake of survival and prosperity in society, each individual wants to win, to do better and even the best among all the competitors. In the macro scale, each enterprise wants to maximize its profits and monopoly the market. It is just the desire to win that inevitably brings about the competition. ...read more.

China's "Reform and Opening up Policy" has substantially proven the benefits brought about by the introduction of competition mechanism. Competitions can also impetus the advance of technology. The increasingly fierce international competition has led to the unprecedented prosperity of science and technology. The rapid development of astronautics, for instance, is the direct outcome of the astronautical competition between the United States and the former Soviet Union. It is hard to imagine those common things and their great benefits to us, satellite, astronaut, space shuttle, Apollo Program, GPS etc., without the competition between the two super powers in the last century. Furthermore, in competition for dominance, political parties may offer beneficial and appealing policies to their public. ...read more.

The employment of vicious methods and negative campaigning can only lead to a harmful, downward social trend. Therefore people should avoid baleful competition and the government as well as the legislature should induct and standardize social competition by legislation and administration. In sum, from what has been discussed above, we may finally draw the conclusion that competition is ultimately more beneficial than detrimental to society. Thus a salutary social mechanism of encouraging positive competitions and eliminating negative ones is needed for the healthy, sustainable development of society and the happiness of its citizens. While most deal with some form of competition almost daily, it is impossible for one to become immune to the effects competition can have on a society, this includes a vast array of different opinions and thoughts on controversial subjects. ...read more.