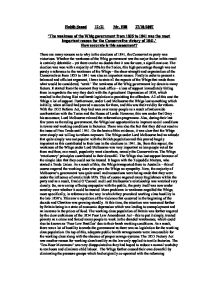 Conservative Victory of 1941, Peel and the Weakness of the Whigs.

Habib Saeed 12:21 Mr. Hill 27/10/2007 'The weakness of the Whig government from 1835 to 1841 was the most important reason for the Conservative victory of 1841.' How accurate is this assessment? There are many reasons as to why in the elections of 1841, the Conservative party was victorious. Whether the weakness of the Whig government was the major factor in this result is certainly debatable - yet there can be no doubts that it was for sure, a significant one. The election was won with a majority of 70% by the Tories, this high percentage though was not purely a reference to the weakness of the Whigs - the sheer strength and organisation of the Conservatives from 1835 to 1841 was also an important reason. Firstly in order to present a balanced and efficient argument, I have to state all the aspects of the Whigs that made them what would be considered, 'weak.' The weakness of the Whig government lay down to many factors. It started from the moment they took office - a loss of support immediately hitting them in regards to the way they dealt with the Agricultural Depression of 1830, which resulted in the Swing Riot and harsh legislation in punishing the offenders. All of this cost the Whigs a lot of support. Furthermore, under Lord Melbourne the Whigs lost something which initially, when utilised had proved a success for them, and this was their avidity for reform. ...read more.

The re-branding of the Tories as the 'Conservatives' also helped Peel to move the party away from the mistakes of its past. Moreover, Peel understood that the middle classes, newly provided with voting rights, were a more important social grouping than ever. He thus looked to modernise the party by making it less narrow and less dogmatic, enabling him to take advantage of the Reform Bill's hidden benefits. The new boundary and constituency changes that it implicated meant that parties had to be organised on a national scale. Peel therefore encouraged party membership, in which constituents were able to certify their Conservative standing by joining its electoral role. At the same time, Peel introduced 'party agents'. Masterminded by F. R. Bonham, these agents were responsible for public relations and, during this period, for spreading Peel's new interpretations of Toryism. Although not a new concept, under Peel's guidance this model thrived, enabling the message of the Tamworth Manifesto to travel beyond his constituency and hence to make an impression on the entire country. In this period of change, though, it was imperative that Peel reaffirmed the foundation of traditional Tory values. He therefore emphasised the protection of the Anglican Church; the maintenance of law and order; the upholding of the role of the monarch; and the defence of the constitutional rights of the House of Lords. In doing so, Peel was able to ensure that his new schemes did not detract from the traditional policies that had served the Tories so well in the past. ...read more.

However, without Peel's exploitation, the Whig mistakes may have gone unnoticed. It was only through the Tories' re-emergence, and their leaders' astute judgement, that they were to feel the full wrath of their failures. In conclusion, I think that the victory in the elections of 1841 were down to many factors, however, to define one more significant than the other is also important to my analysis. I think that the reorganisation of the Conservative party was very important as it led to the creation of new policies and principles, a clear example being the Tamworth Manifesto. This is probably a more important reason than the legacy of Peel's Hundred Days. The main two factors though were of course, the weakness of the Whigs, and the role Peel himself played from 1835 to 1841. The question is though, was the Whigs weakness a more important factor than Peel's brilliance at capitalising on this inadequacy. I personally believe that although Peel accentuated every mistake made by the Whigs, had the Whigs not made each and every mistake that they did, then the revitalisation of the Tories may not have been as successful as it was. To put it simply, the Whigs should never have been in the position of weakness that they were in and thus, for this reason I think that the statement posed in the question is fairly accurate in the sense that it was probably the most important reason but it must be noted, it wasn't the only reason - there were many factors that contributed to the Conservative victory in 1841. ...read more.