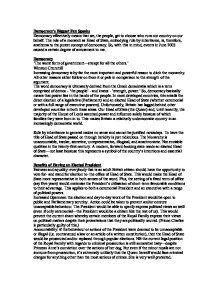 Democracy's Biggest Fan Speaks Democracy effectively means that we, the people, get to choose who runs our country on our behalf. The role of a monarch as Head of State, embodying rule by inheritance, is, therefore, anathema to the purest concept of democracy. So, with this in mind, events in June 2003 caused a certain degree of amusement to me. Democracy 'The worst form of government-except for all the others.' Winston Churchill Increasing democracy is by far the most important and powerful reason to ditch the monarchy. All other reasons either follow on from it or pale in comparison to the strength of the argument. The word democracy is ultimately derived from the Greek demokratia which is a term comprised of demos - 'the people' - and kratos - 'strength, power.' So, democracy basically means that power lies in the hands of the people. In most developed countries, this entails the direct election of a legislative (Parliament) and an elected Head of State (whether ceremonial or with a full range of executive powers). Unfortunately, Britain has lagged behind other developed countries in both these areas. Our Head of State (the Queen) and, until recently, the majority of the House of Lords assumed power and influence solely because of which families they were born in to. ...read more.

He receives �359,000 per annum (probably spent on guns). This extra payment could be immediately wiped out. Only one person - the Head of State - needs to be supported in their activities by the country's taxes. With the former Monarchy forced to live in their private residences, more (and more of the) state owned palaces and properties would be made available for public viewing. It's entirely likely that more people would visit these sites and therefore more income would be generated for the Treasury. Such income could then be spent on the things that really matter to all of us - the NHS, education, etc. I do not accept the argument that less people would visit Britain if we no longer had a monarchy; most current tourists only get to see the public buildings and ceremonies as it is. Other than the jubilee, the site of a royal in public is a rare thing indeed. Decreased security costs - if the President fulfils only a ceremonial role (less people to protect). Decreased travel expenses - if we have a ceremonial President, there will be fewer in the entourage, less security, better use of existing methods of transportation. The phrase "time is money" applies here, too. ...read more.

Monarchs are not subject to the influences which corrupt short-term presidents. A monarch looks back on centuries of history and forward to the well-being of the entire nation under his heir. By retaining certain constitutional powers, or at least denying them to others, a monarch is the safeguard against civil or military dictatorship. Sir Winston Churchill said that had the Kaiser still been German Head of State after 1918, Hitler could not have come to power, or at least not remained there. In Italy, when in 1943 he had the opportunity to do so, King Victor Emmanuel removed Mussolini from office. Romania's King Michael dismissed the dictator Antonescu and transferred his country from Axis to the Allies, for which he was decorated by the Great Powers, and in Bulgaria King Boris III (although obliged to enter the war on the side of the Axis), bravely refused to persecute Bulgarian Jews and would not commit his forces outside his country's borders. As we have seen in Spain and Thailand, monarchs have succeeded in defending democracy against the threat of permanent military take-over. Even Royal Families which are not reigning are dedicated to the service of their people, and continue to be regarded as the symbol of the nation. Prominent examples are H.R.H. the Duke of Braganza in Portugal and H.R.H. the Count of Paris in France. Royal Families forced to live in exile are often promoters of charities formed to help their countries. ...read more.