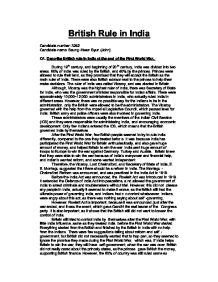 Describe British rule in India at the end of the First World War.

British Rule in India Candidate number: 3242 Candidate name: Seung-Hwan Byun (John) Q1. Describe British rule in India at the end of the First World War. During 19th century, and beginning of 20th century, India was divided into two areas. 60% of India was ruled by the British, and 40% by the princes. Princes were allowed to rule their land, as they promised that they will accept the Britain as the main ruler of India. There were also British advisor next to the princes to help them make decisions. The ruler of India was called Viceroy, and was elected in Britain. Although, Viceroy was the highest ruler of India, there was Secretary of State for India, who was the government minister responsible for Indian affairs. There were approximately 10,000~12,000 administrators in India, who actually ruled India in different areas. However, there was no possible way for the Indians to be in the administration, only the British were allowed to be the administrators. The Viceroy governed with the help from the Imperial Legislative Council, which passed laws for India. British army and police officers were also involved in governing India. These administrators were usually the members of the Indian Civil Service (ICS) and they were responsible for administering India, and encouraging economic development. ...read more.

Gandhi suggested the creation of a constitution without the agreement of the other religions, such as Muslims, and Christians. It was rejected, and it followed by the 3rd Round Table Conference. However, the labour party, and the congress did not join, so no decisions could be made, so the round table conference also failed to agree at some point. Then in 1935, British announced the Government of India Act. Dyarchy came to and end and the provincial government controlled everything, apart from the defence and foreign affairs. Each provinces had legislative assembly of its own, which were mostly Indians. There was still the Viceroy, who was elected in Britain, but the viceroy needed to follow the advice of an Executive Committee, which were mostly Indians. It gave a huge self-government to India compared to other acts, but the congress and the Muslim league rejected it, which meant they are not satisfied, as the British still governed the central government. The British tried to control India in dyarchy first, but as it did not work out well, they tried to negotiate and tried other acts, but it also did not work well. Finally, they allowed the provincial government to govern themselves, but still the British did not give up the central government, as they did not want to give up India, the country with vast population, and resources. Q3. Why did all the attempts to reform the government of India fail? ...read more.