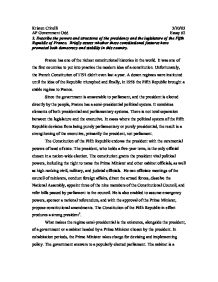 Describe the powers and structures of the presidency and the legislature of the Fifth Republic of France. Briefly assess whether these constitutional features have promoted both democracy and stability in this country.

Kristen Critelli 3/10/03 AP Government Odd Essay #2 2. Describe the powers and structures of the presidency and the legislature of the Fifth Republic of France. Briefly assess whether these constitutional features have promoted both democracy and stability in this country. France has one of the richest constitutional histories in the world. It was one of the first countries to put into practice the modern idea of a constitution. Unfortunately, the French Constitution of 1791 didn't even last a year. A dozen regimes were instituted until the idea of the Republic triumphed and finally, in 1958 the Fifth Republic brought a stable regime to France. Since the government is answerable to parliament, and the president is elected directly by the people, France has a semi-presidential political system. It combines elements of both presidential and parliamentary systems. ...read more.

The Constitution of the Fifth Republic in effect produces a strong president1. What makes the regime semi-presidential is the existence, alongside the president, of a government or a cabinet headed by a Prime Minister chosen by the president. In cohabitation periods, the Prime Minister takes charge for devising and implementing policy. The government answers to a popularly elected parliament. The cabinet is a collective body under the Prime Minister's control. Members advise the bureaucracy and partake in forming policy initiatives that, after receiving the approval of the government and president, constitute the legislative agenda. The cabinet has little power, and on the other hand, the French bureaucracy has immense power and self-rule. Parliament lacks sovereignty from the executive. The French parliament does not hold a forum for national debates or check governmental abuses of power. ...read more.

Public opinion strongly favors institutional stability. Consequently, the regime reflects a fairly capable balance between state autonomy and democratic participation. In the current Fifth Republic, enormous executive power is given to the President. His government is composed of a Council of Ministers, led by a Prime Minister. The legislative power, known as the Parliament consists of the National Assembly and the Senate. The 1958 Constitution gave France a lasting and accepted regime. The stress on the powers of the President was balanced by a similar emphasis for a call for clear separation of legislature, executive and judicial powers. The constitution of the Fifth Republic represents, largely through the rights it guarantees, the sources of power within the French nation. Despite criticism that the executive is too powerful, the Fifth Republic has become one of the most stable regimes in French history. 1 Kesselman, Mark, Joel Krieger, and William A. Joseph. Comparative Politics at the Crossroads. Page132. ...read more.