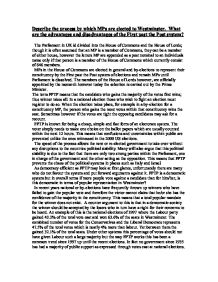 Describe the process by which MPs are elected to Westminster. What are the advantages and disadvantages of the First past the Post system? The Parliament in UK

Describe the process by which MPs are elected to Westminster. What are the advantages and disadvantages of the First past the Post system? The Parliament in UK id divided into the House of Commons and the House of Lords; though it is often assumed that an MP is a member of Commons, they can be a member of either house, however the letters MP are appended as a post nominal to an individuals name only if that person is a member of the House of Commons which currently consist of 646 members. MPs in the House of Commons are elected in general and by-elections to represent their constituency by the First past the Post system of elections and remain MPs until Parliament is dissolved. The members of the House of Lords however, are officially appointed by the monarch however today the selection is carried out by the Prime Minister. The term FPTP means that the candidate who gains the majority of the votes first wins; thus winner takes all. ...read more.

This means that FPTP prevents the chaos of the political systems in places such as Italy and Israel. As democracy efficient as FPTP may look at first glance, unfortunately there are many who do not favour the system and put forward arguments against it. FPTP is a democratic system but in overall terms if more people vote against a candidate than for him/her, is this democratic in terms of popular representation in Westminster? In recent years national or by-elections have frequently thrown up winners who have failed to gain the popular vote and therefore the victor cannot claim that he/or she has the confidence of the majority in the constituency. This means that a total popular mandate for the winner does not exist. A counter argument to this is that in a democratic society the winner should be accepted by the losers who in turn have a right for their concerns to be heard. ...read more.

For minor parties this could mean that some of their supporters would not bother to turn up knowing that their vote will be a waste. Some may even decide to vote for a different party through tactical voting. All this discriminates the smaller parties who would be losing vital votes and fail to make any long-term progress. In 2001 the Lib Democrats gained 52 seats and 19% if the total votes. Using the basic form of PR, this figure would be equal to 120 seats and therefore it is clear that when it comes to fairness, smaller parties lose out. As FPTP continues functioning the way it is, it can only favour the Tory and Labour parties. In polls carried out between 1999 and 2000, 60% if people asked claimed that they would favour a form of PR in order to make the system fairer but the question is, would a major party such as Labour change the current system which favours them? The common and probably wise answer would be no and therefore as it stands, FPTP will be with us for a long time to come. ...read more.

Response to Question
This question is a fairly typical two-part question, with candidates needing to address both areas and draw on different skills in order to write a good essay. This candidate has succeeded in writing a clear essay that ...

Response to Question
This question is a fairly typical two-part question, with candidates needing to address both areas and draw on different skills in order to write a good essay. This candidate has succeeded in writing a clear essay that answers both parts of the question, and places weight on the evaluative part of the essay (advantages/disadvantages). As evaluation is a higher-level skill, it enables the candidate to reach the upper band of marks. They discuss relevant information in a sufficient level of detail and draw on real-world examples to support their points, making for a successful essay.

Level of Analysis
The candidate's level of analysis is of a good standard, most likely an A or B grade. Some of the arguments that are made for or against first-past-the-post are not expanded on or developed, but the candidate shows several examples of analysis, with his/her paragraph on the issue of the popular vote when using FPTP being a particularly good example, which provides examples from British political history to support and explain their argument. There is a good balance of analysis of advantages and disadvantages, ensuring that the candidate is providing evidence for both arguments before making a judgement.

Quality of Writing
Spelling and punctuation are both fine in this essay. The candidate is able to make their ideas clear and explain them well, although some of the sentences seem clunky or fail to make sense ("As democracy efficient as FPTP may look at first glance" - in this case the jist is fairly obvious, but it lets the candidate down a little). I feel that if more care was taken over phrasing and the standard of writing overall, then it would give a better impression of the candidate's skills. However, these sorts of errors are largely ignored at GCSE level, and as the content is good, the candidate would not lose out significantly.