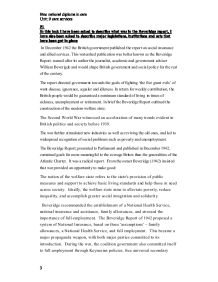 Describe what was in the Beveridge report

P1 In this task I have been asked to describe what was in the Beveridge report, I have also been asked to describe major legislations, institutions and acts that have been put in place In December 1942 the British government published the report on social insurance and allied services. This watershed publication was better known as the Beveridge Report- named after its author the journalist, academic and government adviser William Beverigde and would shape British government and social policy for the rest of the century. The report directed government towards the goals of fighting 'the five giant evils' of want disease, ignorance, squalor and idleness. In return for weekly contribution, the British people would be guaranteed a minimum standard of living in times of sickness, unemployment or retirement. In brief the Beveridge Report outlined the construction of the modern welfare state. The Second World War witnessed an acceleration of many trends evident in British politics and society before 1939. The war further stimulated new industries as well as reviving the old ones, and led to widespread recognition of social problems such as poverty and unemployment. ...read more.

Contemporary arguments emphasized the inter-related nature of these services, and the importance of each for the others. However, the administrative division between services was reinforced by reactions against the unifying and all-embracing nature of the Poor Law, which led to a strong distinction being made between income maintenance, health and welfare services. Although not entirely as Beveridge wished, the measures were adopted and formed the basis of the British post-war Welfare State. Family allowances were enacted in 1945, and National Insurance and the National Health Service in 1946; full employment became government policy. Together, these developments created the welfare state, a system of social security guaranteeing a minimum level of health and social services. The main legislations and acts that have been put in place because of the Beveridge report are: * The national insurance act (1946) created an integrated universal system of social insurance. The goal was to cover all major personal risks (such as sickness and unemployment) and pay out benefits that would support people when they had no income from paid work. ...read more.

The conservative party, lead by Margaret Thatcher, challenged the consensus view that the government should found universally available and free welfare services. When they were elected to government in 1979, the Thatcher-led conservative party set about rethinking the role of the state in the provision of health and welfare services. One of the aims of the conservative government of the 1980s a nd early 1990s was to reduce the direct involvement of the state in the founding and provision of welfare services. The aim was to shift some of the responsibility onto private and voluntary sector providers as well as placing greater responsibility on the individual and their family for meeting personal welfare needs. The conservative governments of this period felt that the state had gone to far in providing welfare and had in fact, trapped some sections of the population in welfare dependency. Welfare provisions during the 1980s was 'reformed' through the reduction in the range of service available, the introduction of means-testing and eligibility criteria and by increasing the use of the voluntary and private sector organisations as providers of specialist forms of social and health care. ?? ?? ?? ?? Btec national diploma in care Unit: 9 care services 3 ...read more.