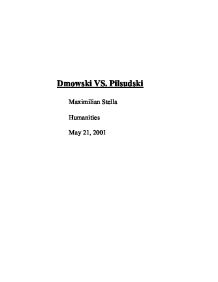 Dmowski VS. Pilsudski Maximilian Stella Humanities May 21, 2001 Jozef Klemens Pilsudski is regarded as one of the greatest Poles ever lived by historians and generals all over the world. He organized political uprisings and fought an underground battle against the occupying countries, he struggled and especially disliked the Russians. Another Polish well-known politician during WWI and the recreation of Poland was Roman Dmowski. Just as Pilsudski, Dmowski's biggest dream was to give the Polish people an independent state and government. Just as Pilsudski, he struggled and organized a party that fought against the countries that had divided Poland among themselves by force in 1795, they had though very different views on how and whom they should fight... Dmowski and Pilsudski wanted to somehow unite the distinct types of political groupings. The mayor three institutions that had to be controlled were the Church, Army and the Intelligentsia. The Catholic Church was represented by an arch-conservative hierarchy and a lesser clergy. The Church supported Dmowski because of his opinion that Poland should be only for Poles and have only one church, the Catholic. ...read more.

The Germans had a socialist party, the DSAP, and a nationalist party, the Jungedeutsche Partei. The Jews in Poland didn't really have one or two big parties. They were divided among hundreds of different small independent political groups. In contrast, the Byelorussians had one organization that represented them all, the Hramada. The Ukrainians took over and organizations a lot of parties after that Poland lost its areas around Lwow, they also organized a widespread campaign of terrorism and sabotage. On the side there were also a number of vociferous groups on the political fringe. The Fascists were on the Right and the Communists at the left. Those were problems to be solved by the two leaders. Both Dmowski and Pilsudski were democrats, they wanted though to achieve their goals in very different ways. In the pre-war time they both sought help from foreign countries, Dmowski visited Washington, later on Japan were he met Pilsudski. Dmowski organized a National League and wanted to fight the Germans from Paris, he sought the Russian as less dangerous and wanted therefore to restrain good relationships with them. ...read more.

As mentioned before, Pilsudski was tolerant against all races and beliefs. His concept of a nation was simply that all the people sharing the same goals, values and loyalties, could create a good-working nation. As hundreds of years earlier, when Poland was the biggest country in Europe, including tens of different minorities and races, Pilsudski believed that it could once again unite and fight for their independence. Dmowski however, saw one race as one nation. He didn't tolerate the people with different languages, beliefs and history to form a nation. He believed that God had segregated them for a purpose and that was to create distinctive, separate nations. Pilsudski tolerated all religions and nationalities that fought for an independent Polish state, therefore he got more people with him and managed to re-create Poland. Although they both shared the same goal, Pilsudski's plan ended up being correct and after leading the Polish army to victory in the Battle of Warsaw, he was praised as the man who freed Poland and it's people. ...read more.