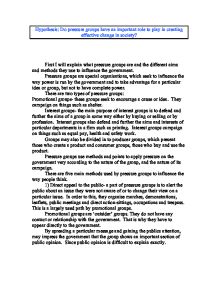 Do pressure groups have an important role to play in creating effective change in society?

Hypothesis: Do pressure groups have an important role to play in creating effective change in society? First I will explain what pressure groups are and the different aims and methods they use to influence the government. Pressure groups are special organisations, which seek to influence the way power is run by the government and to take advantage for a particular idea or group, but not to have complete power. There are two types of pressure groups: Promotional groups- these groups seek to encourage a cause or idea. They campaign on things such as shelter. Interest groups- the main purpose of interest groups is to defend and further the aims of a group in some way either by buying or selling or by profession. Interest groups also defend and further the aims and interests of particular departments in a firm such as printing. Interest groups campaign on things such as equal pay, health and safety work. Groups may also be divided in to producer groups, which present those who create a product and consumer groups, those who buy and use the product. ...read more.

So it will try to influence their views. 3) Parliament- pressure groups target for the parliament because laws are made there and the government faces public debate and criticism at the parliament. Ways in to the parliament are: * Influencing MPs and asking them to support you. Influencing can take many forms. A mass approach where a large number of people in the same pressure group may talk to their MPs all at the same time, or individual approaches or group approaches or writing letters or mail shots. * Legislation- MPs have the right to promote new laws as individuals although most laws that pass on to the law book are sponsored by the government. Governments may sponsor legislation as a result of the activities a pressure group does. Using friendly MPs, pressure groups may be involved in changing a bill during its way through the parliament. There are two stages at which this is possible: 1) Committee stage- a small party meeting up with MPs at which reformations are considered. ...read more.

5) Specialised Knowledge- decisions, which involve large, technical knowledge, are given to the experts, they can eventually influence the final decisions. 6) Key positions- politicians may need help from pressure groups to help them eliminate certain government policies. They ask the group to carry the tasks out and if the group does carry it out successfully then it can influence the decisions. 7) Civil disobedience- if strategies fail the pressure group may turn to civil disobedience. They may bloke roads or stage illegal protests and in the extreme, some groups turn to criminal activities. Having looked at pressure groups generally, I realised how varied they are. I feel that there must be a definite need for them as they must be doing a good job obviously. Political parties are concerned about the country, but different parties have different ideas and not all of the peoples concerns are covered. This is evident because so many pressure groups exist. Pressure groups like R.S.P.C.A, Friends of the Earth are very well known and are part of our everyday lives. Therefore looking at pressure groups in general, I feel they are doing a good job. ...read more.