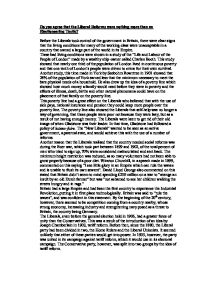 Do you agree that the Liberal Reforms were nothing more than an Electioneering Tactic?

Do you agree that the Liberal Reforms were nothing more than an Electioneering Tactic? Before the Liberals took control of the government in Britain, there were clear signs that the living conditions for many of the working class were unacceptable in a country that owned a large part of the world in its Empire. These bad living conditions were shown in a study of the "Life and Labour of the People of London" made by a wealthy ship-owner called Charles Booth. This study showed that nearly one third of the population of London lived in continuous poverty and that one tenth of London's people were driven to crime for their own survival. Another study, this time made in York by Seebohm Rowntree in 1901 showed that 28% of the population of York earned less that the minimum necessary to meet the bare physical needs of a household. He also drew up the idea of a poverty line which showed how much money a family would need before they were in poverty and the effects of illness, death, births and other natural phenomena could have on the placement of that family on the poverty line. This poverty line had a great effect on the Liberals who believed that with the use of sick pays, national insurance and pension they could keep more people over the poverty line. ...read more.

This shows that the Liberals did not have to create any reforms, when tariff reform had won them the election. Any reforms created would have been out of actual want to change the situation in Britain. Once in power, the Liberals began to try and change the situation almost immediately. On the 9th April 1906, the Government brought in an Education Bill designed to reverse the 1902 Education Act, as the Liberals had made it known that they were a party of non-conformists. This was when the party met with a significant obstacle, the House of Lords. The House of Lords had the power to block any decisions made by the government and was made up of mainly Conservatives. This severely stemmed the power that the new government had. The government managed, however, to pass some reforms including the School Meals Act, the Trades Disputes Act, which reversed the Taff Vale case and the Medical Health Act, which were created in a continuous stream after 1906. The Medical Health Act was started in 1907 and it meant that there should be compulsory medical inspections of children in school. Once launched it became the most important single measure of preventive medicine ever undertaken, although it took some time for it to be set up. ...read more.

Lloyd George had grown up in Wales to a widowed and poverty stricken family. He knew what it was like to try and escape poverty and would have been able to relate to those living in poverty, but he would also have wanted to improve their lives, having experienced the same things as them. His intentions would have been for the good of the people and not to get more votes. All in all, the Liberals had enough votes after their massive victory in 1906 to feel confident in themselves, that they didn't have to go to any super efforts to keep those votes, or to get more. The personalities of the members of the Liberal party also meant that their intentions would have been for the good of the poor, seeing as some members had first hand experience of growing up with poverty. Their reforms benefited the poor but also meant that the Conservatives were appeased with the building of eight dreadnoughts, and some acts made massive differences to the lives of the poor and were made so that they were kept in for a long time, not just a quick idea, which would gain votes in the short term. It is because of all these points that I do not agree that the Liberal reforms were nothing more than an electioneering tactic. ...read more.