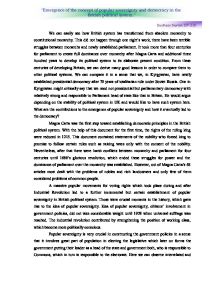 &quot;Emergence of the concept of popular sovereignty and democracy in the British political system.&quot;

We can easily see how British system has transformed from absolute monarchy to constitutional monarchy. This did not happen through one night's work, there have been terrible struggles between monarchs and newly established parliament. It took more than four centuries for parliament to create full dominance over monarchy after Magna Carta and additional three hundred years to develop its political system to its elaborate present condition. From these centuries of developing Britain, we can derive many good lessons in order to compare them to other political systems. We can compare it in a sense that we, in Kyrgyzstan, have newly established presidential democracy after 70 years of totalitarian rule under Soviet Russia. One in Kyrgyzstan might critically say that we need not presidential but parliamentary democracy with relatively strong and responsible to Parliament head of state like that in Britain. He would argue depending on the stability of political system in UK and would like to have such system here. What are the contributions to the emergence of popular sovereignty and how it eventually led to the democracy? ...read more.

Idea of popular sovereignty, citizens' involvement in government policies, did not take considerable weight until 1928 when universal suffrage was reached. The industrial revolution contributed by strengthening the position of working class, which become more politically conscious. Popular sovereignty is very crucial in constructing the government policies in a sense that it involves great part of population in electing the legislative which later on forms the government putting their leader as a head of the state and government both, who is responsible to Commons, which in turn is responsible to the electorate. Here we can observe interrelated and interdependent chain of elements whose final destination is to make good government strategies for the future. Really, each element is dependent to each other and it creates excellent democratic relations between them. It seems that people are the freest among these, but if we speculate further we can see that, they are dependant on their own decision to elect the right candidates. Otherwise, if they choose not the best candidate they would be victims of their own will. ...read more.

There are group of ministers in the cabinet, formed by prime minister, bureaucratic staff, and various semipublic agencies, which are involved in the government decision or can influence on decision. The good example of ignoring the rest of the government is the eurosceptic policy of Margaret Thatcher in the late 1980s, which came out not very good for her. Saying all these things above I would like to point that Britain had very slow but elaborate political change in its system. Every step was given strong attention and made under responsible acts. For the current time it is the most stable forms of established liberal-democracies. However, as we cannot predict our future, will British government be able to maintain its position and political regime in its condition as todays? How long this regime will last? Because as we can learn from history, needed regimes emerged at certain points and the central actors were always common people. Here I would like to put Artyem's statement about the future politics: "May be there will emerge other, different forms of regimes that will best meet the necessities of people"? ...read more.