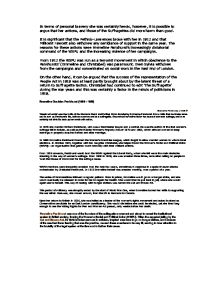 In terms of personal bravery she was certainly heroic, however, it is possible to argue that her actions, and those of the Suffragettes did more harm than good. It is significant that the Pethick-Lawrences broke with her in 1912 and that Millicent Fawcett also withdrew any semblance of support in the same year. The reasons for these actions were Emmeline Pankhurst's increasingly dictatorial command of the WSPU and the increasing violence of her campaigns. From 1912 the WSPU was run as a terrorist movement in which obedience to the Pankhursts' (Emmeline and Christabel) was paramount. Even Sylvia withdrew from the campaigns and concentrated on social work in the East End of London. On the other hand, it can be argued that the success of the representation of the People Act in 1918 was at least partly brought about by the latent threat of a return to Suffragette tactics. ...read more.

He was the author of the first women's suffrage bill in Britain, as well as the Married Women's Property Acts of 1870 and 1882, which allowed women to keep earnings or property acquired before and after marriage. In 1889 Emmeline Pankhurst founded the Women's Franchise League, which fought to allow married women to vote in local elections. In October 1903, together with her daughter Christabel, she helped found the Women's Social and Political Union (WSPU) - an organisation that gained much notoriety with their militant actions. From 1906 onwards, Pankhurst would lead the WSPU against the Liberal Party, whom she felt were the main obstacles standing in the way of women's suffrage. From 1908 to 1909, she was arrested three times, once after calling on people to 'rush the House of Commons' for the suffrage cause. ...read more.

Upon her return to Britain in 1926, she was hailed as a leader of the women's rights movement and asked to stand as Conservative candidate for an East London constituency. She would die before she could be elected, yet she lived long enough to see the Voting Rights for Men and Women Act passed, only weeks before her death. Emmeline Pankhurst was one of the founders of the suffragette movement and aimed to reveal the institutional sexism in British society, forming the Women's Social and Political Union (WSPU). Often the repeated jailing by the Cat and Mouse Act, for trivial misdemeanours in activism, inspired members to go on hunger strikes, and because of the resultant force feeding that was the practice, caused these members to be very ill, serving to draw attention to the brutality of the legal system at the time and to further their cause. ...read more.