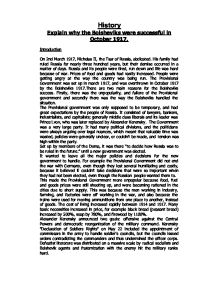 Explain why the Bolsheviks were successful in October 1917.

History Explain why the Bolsheviks were successful in October 1917. Introduction On 2nd March 1917, Nicholas II, the Tsar of Russia, abdicated. His family had ruled Russia for nearly three hundred years, but their demise occurred in a matter of days. Russia and its people were tired, run down and life was hard because of war. Prices of food and goods had vastly increased. People were getting angry at the way the country was being run. The Provisional Government was set up in march 1917, and was overthrown in October 1917 by the Bolsheviks 1917.There are two main reasons for the Bolsheviks success. Firstly, there was the unpopularity, and failure of the Provisional government and secondly there was the way the Bolsheviks handled the situation. The Provisional government was only supposed to be temporary, and had great expectations by the people of Russia. It consisted of lawyers, bankers, industrialists, and capitalists; generally middle class liberals and its leader was Prince Lvov, who was later replaced by Alexander Kerensky. The Government was a very large party. It had many political divisions, and the politicians were always arguing over legal nuances, which meant that valuable time was wasted, policies were generally unclear, or couldn't be made, and tension was high within the party. ...read more.

General Kornilov, coming out of nowhere, demanded harsh military discipline. In desperation he was made commander-in-chief on July 30, but it was too late - the people turned their eyes on the Bolsheviks now. The sailors and soldiers fighting in the war were practically trained up peasants, and because they were all at war and not in the factories there was no one to make the munitions, so they had guns with no bullets, or no guns at all. When the Provisional Government failed to end the war, the soldiers and sailors reacted badly, and in the end, many men deserted the armed forces and went back home to their families. The peasants believed that they should be able to own their own land, but the Provisional Government wouldn't agree and believed that this was yet another decision for the elected government to decide. But the peasants were getting very angry and began to seize land for themselves, in spite of the government's decision. This resulted in many landowners being murdered. The Provisional Government also needed support from the Petrograd Soviet. Without the Soviet's help, who took care of the armed forces in Petrograd, the Provisional Government was nothing, it was set up to represent the workers and soldiers of Petrograd and was a committee of soldiers, and workers, to represent the working class. ...read more.

He established a dictatorship or the proletarian. This gained supporters in high places. Half the army supported the Bolsheviks, as did sailors at Kronstadt navel base near Petrograd, and major industrial centres were pro Bolsheviks. Therefore gaining control in key areas. The Bolshevik slogan was, "Peace, bread and Land." And "All power to the solviets." This was something that the whole country wanted, including the Bolsheviks, so it worked. Lenin called for immediate peace "without annexations and reparations." This attracted the army because they were tired and weary from war efforts. The bread attracted the urban workers because they were short of food, and the land attracted the peasants. With all above assets, it is not hard to see that the Russians trusted the Bolsheviks, and so they gained power easily. They used effected propaganda, raised fears of the Tsar return, and exploited the failure of the Provisional Government. This way they easily got people to side with them over any other party. Because the Bolsheviks were such a small, disciplined group, they could decide upon their policies much quicker, and didn't waste their time arguing, because the all had the same ideas and everyone agreed to the same aims and roles. Internal lines of communications were a lot quicker. ...read more.