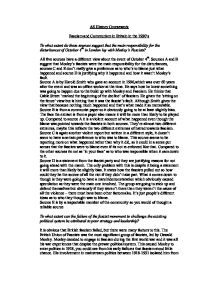 Fascism and Communism in Britain in the 1930's

AS History Coursework Fascism and Communism in Britain in the 1930's To what extent do these sources suggest that the main responsibility for the disturbances of October 4th in London lay with Mosley's Fascists? All five sources have a different view about the event of October 4th. Sources A and B suggest that Mosley's fascists were the main responsibility for the disturbances, sources C and E don't really give a preference as to who's to blame just what happened and source D is justifying why it happened and how it wasn't Mosley's fault. Source A is by Harold Smith who gave an account in 1996,which was over 60 years after the event and was an office worker at the time. He says how he knew something was going to happen due to the build up with Mosley and Fascism. He thinks that Cable Street 'marked the beginning of the decline' of fascism. He gives the 'sitting on the fence' view but is hinting that it was the fascist's fault. Although Smith gives the view that because nothing much happened and that's what made it so memorable. Source B is from a communist paper so it obviously going to be at least slightly bias. ...read more.

It is obvious that British fascism failed, but there were many factors to this. The British Union of Fascists was the most significant group of fascists, led by Oswald Mosley. Mosley decided to engage in fascism during the first world war and it was all his war experiences that despise the prewar political system. This caused Mosley to enter politics in 1918, you could see from his early failures that fascism stood little chance. His involvement in mainstream politics between 1918-1931 isolated him from the parliamentary system, this could possibly show his nature of being unique. Mosley went through many different political parties such as a Coalition Unionist MP, sat as an Independent, joined the Labour Party and then founded the New Party in 1931. This party was the indication of Mosley's interest in fascism, although the party did not succeed the October 1931 election and so diminished. Mosley then decided to turn to Mussolini and Nazi leaders and find his way through fascist politics. The BUF then formed on 1 October 1932, it was a very controversial movement especially in 1934 where it became obvious the group became cruder and anti-semitic. ...read more.

Mosley couldn't even compete with Labour and so failed to attract even the unemployed. Mosley also admitted the BUF wasn't created early enough to take political advantage of the slump. The slump included things such as low interest rates, getting rid of the gold standard, limited reflation and empire preference, combined with an increase with real wages to help get the economy back on track. The BUF wanted to use these problems and turn them into fascist successes. The BUF was really controversial and isolated from Britain's political culture, the use of uniform especially reminded the public of Hitler's Nazi regime and over-the-top culture and provided room for speculation involving links with Hitler and Mussolini. The use of anti-semitism and violence was extremely popular for followers of the movement in the East End of London but else where was causing concern. There was a lot of opposition to British fascism though, there were anti-fascist activists and state management was also a problem. The fascists got the blame for public violence and disorder and the Blackshirts were also under surveillance from November 1933. Press coverage went down as newspapers and the BBC did not want to be associated at all with any pro-Mosley events. ...read more.