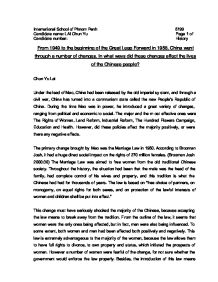 From 1949 to the beginning of the Great Leap Forward in 1958, China went through a number of changes. In what ways did these changes affect the lives of the Chinese people?

From 1949 to the beginning of the Great Leap Forward in 1958, China went through a number of changes. In what ways did these changes affect the lives of the Chinese people? Chun Yu Lai Under the lead of Mao, China had been released by the old imperial system, and through a civil war, China has turned into a communism state called the new People's Republic of China. During the time Mao was in power, he introduced a great variety of changes, ranging from political and economic to social. The major and the most effective ones were The Rights of Women, Land Reform, Industrial Reform, The Hundred Flowers Campaign, Education and Health. However, did these policies affect the majority positively, or were there any negative effects. The primary change brought by Mao was the Marriage Law in 1950. According to Brooman Josh, it had a huge direct social impact on the rights of 270 million females. (Brooman Josh 2000:30) The Marriage Law was aimed to free women from the old traditional Chinese society. Throughout the history, the situation had been that the male was the head of the family, had complete control of his wives and property, and this tradition is what the Chinese had had for thousands of years. The law is based on "free choice of partners, on monogamy, on equal rights for both sexes, and on protection of the lawful interests of women and children shall be put into effect." ...read more.

However, the difference is that now the peasants had their land taken away and given to the state, which would then pay the peasants wages for their labor, rather than rents. Although this might have resulted that China did have a higher grain production, this has serious created some social problems. Firstly, according to Brooman Josh, the number of landlords being executed through the Speak Bitterness Meeting reached between 2 and 4 million. (Brooman Josh 2000:30) Even thought this number might seem to be quite small comparing to the population that China had, it's still quite huge, comparing to the fact that 6 million of Jews were killed during World War II. Secondly, the peasants must have been really upset, and confused about the purpose of this policy. Starting with no land, peasants gained some during the process, but lost it all at the end. This must have given them a very hard time, uncertain whether to trust the government or not. Mao's ambitiousness was not finished. He wanted to modernize the industry, improve the technology, making China competitive with the rest of the world, by running a Five Year Plan between 1953 to 1957, which was formerly used in the USSR. The dominant idea of this plan was to focus on the heavy industry, including steel, coal, iron, cement, electric, etc, instead of agriculture. ...read more.

This resulted in the rapid increase of doctors available in the countryside, as well as creating a great number of alternative jobs for the peasants. After all, this has definitely benefited the poor peasants who could not afford to see the professional doctors. Other than that, as part of the health program, there was also the elimination of pests to improve the public sanitation. Campaigns were set where everyone was expected to kill at least one fly and one rat. According to Walsh Ben, "Each family member had to produce one rat's tail a week as evidence of his/her contribution!" (Walsh Ben 1998:271) In the long terms, the improvement of public hygiene had greatly decreased the cases of parasitic and infectious diseases. To some extent, these changes had affected the Chinese both positively and negatively. During the process of changing, Mao had mainly focused on the economic development rather than the people's feelings. Both Land Reform and Industrial Reforms created a great number of social problems. Overall, the living standard fell, consequently, creating a huge depression amongst the majority of population. Other than that, the forbidden of free of speech and the introduction of censorship made Mao even less popular amongst his people. The only changes without any negative outcomes would probably be health and education. However, the success in economic improvement indicates that these changes were nevertheless worth it. All success has brought China into a new era, becoming more and more industrialized, and competitive with the rest of the world. ...read more.