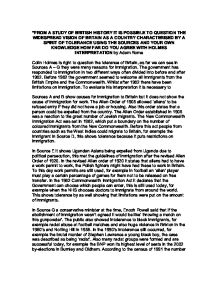 From a Study of British History It Is Possible To Question the Widespread Vision of Brtain As a Country Characterised By a Spirit of Tolerance. Using the Sources and Your Own Knowledge How Far Do You Agree With Holmes' Interpretation.

"FROM A STUDY OF BRITISH HISTORY IT IS POSSIBLE TO QUESTION THE WIDESPREAD VISION OF BRTAIN AS A COUNTRY CHARACTERISED BY A SPIRIT OF TOLERANCE USING THE SOURCES AND YOUR OWN KNOWLEDGE HOW FAR DO YOU AGREE WITH HOLMES INTERPRETATION by Adam Rome Colin Holmes is right to question the tolerance of Britain, as far we can see in Sources A - G they were many reasons for immigration. The government has responded to immigration in two different ways often divided into before and after 1962. Before 1962 the government seemed to welcome all immigrants from the British Empire and the Commonwealth. Whilst after 1962 there have been limitations on immigration. To evaluate his interpretation it is necessary to Sources A and B show causes for immigration to Britain but it does not show the cause of immigration for work. The Alien Order of 1905 allowed 'aliens' to be refused entry if they did not have a job or housing. ...read more.

In the 1962 Commonwealth Immigration Act it declares that the Government can choose which people can enter, this is still used today, for example when the NHS chooses doctors to immigrate from around the world. This shows tolerance by as well showing that limitations were put on the amount of immigrants. In Source G a conservative minister at the time, Enoch Powell said that if the abolishment of immigration wasn't agreed it would be like' throwing a match on this gunpowder'. The public also showed intolerance to black immigrants, for example racial abuse at football matches and also huge violence in Brixton in the 1980's and Notting Hill in 1958. In the 1990's intolerance still occurred, for example the brutal murder of Stephen Lawrence a young black boy, the case was described as being 'racist'. Also many racist groups were formed and are successful today, for example the BNP won its highest level of seats in the 2002 by-elections in Burnley and Oldham. ...read more.

Politicians at this time for example Bruce Paice the Head of Immigration would have supported this law. He said that the country was 'in favour of the British Empire as long as it stayed where it was'. In the Political Debate started in 1948 where they saw the social problems with coloured immigrants, this lead to the Act of 1962. Although this law was passed in 1962 TV shows still showed intolerance towards migrants. For example 'Till Death do us part', which showed Alf Garnett relentless racist comments made towards blacks, Jews and political parties. Although the question states that Britain is at harmony with immigrants and immigration in the views of others, the truth may be that we are not. For example the recent riots in Oldham and Burnley in the summer of 2001. To summarise, there is insufficient evidence that there is tolerance towards immigration in Britain when the book was published. However, countries around the world may have believed that Britain was tolerant. Therefore we do not know if the quote is correct or just one man's opinion. ...read more.