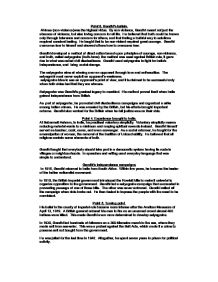 Point 6. Gandhi's beliefs. Ahimsa (non-violence)was the highest virtue. By non-violence, Gandhi meant not just the absence of violence, but also loving concern for all life. He believed that truth could be known only through tolerance and concern for others, and that finding a truthful way to solutions required constant testing. He taught that to be non-violent required great courage. Gandhi overcame fear in himself and showed others how to overcome fear. Gandhi developed a method of direct action based upon principles of courage, non-violence, and truth, called satyagraha (truth-force). the method was used against British rule, it gave rise to what was called civil disobedience. Gandhi used satyagraha to fight for India's independence, and bring social change. The satyagraha aims at winning over an opponent through love and self-sacrifice. The satyagrahi must never exploit an opponent's weakness. ...read more.

In speeches and writing used everyday language that was simple to understand. Gandhi's independence campaigns. In 1915, Gandhi returned to India from South Africa. Within five years, he became the leader of the Indian nationalist movement. In 1919, the British imperial government introduced the Rowlatt bills to make it unlawful to organize opposition to the government. Gandhi led a satyagraha campaign that succeeded in preventing passage of one of those bills. The other was never enforced. Gandhi called off the campaign when riots broke out. He then fasted to impress the people with the need to be nonviolent. Point 5. Turning point. His belief in the cruelty of imperial rule became more intense after the Amritsar Massacre of April 13, 1919. A British general ordered his men to fire on an unarmed crowd almost 400 Indians were killed. ...read more.

Gandhi's life was guided by a search for truth, he helped to free India from British rule by a unique method of non-violent resistance, and is thought of by Indians as the father of their nation. Although Gandhi was small he had great physical and moral strength. He was assassinated by an Indian who resented his programme of tolerance for all creeds and religions. Albert Einstein said "Generations to come will scarcely believe that such a one as this walked the earth in flesh and blood." The dominance of British military power severely reduced the independence of some rulers. Others lost their land completely to the British. Those who were allowed to continue as rulers had their foreign policy closely controlled by British political agents, called residents, and were not allowed to keep large armies. The political unity created by the British in India was welcomed by many enlightened Indians. So too were the moves toward social reform, and the institution of European-style education, based on the use of English. ...read more.