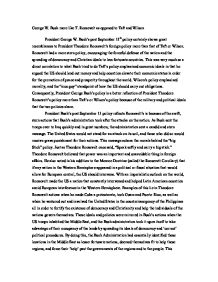 George W. Bush more like T. Roosevelt as opposed to Taft and Wilson

George W. Bush more like T. Roosevelt as opposed to Taft and Wilson

President George W. Bush’s post September 11th policy certainly shows great resemblances to President Theodore Roosevelt’s foreign policy more than that of Taft or Wilson. Roosevelt had a more stern policy, encouraging the forceful defense of the nation and the spreading of democracy and Christian ideals to less fortunate countries. This was very much so a direct correlation to what Bush tried to do Taft’s policy emphasized economic ideals in that he argued the US should lend out money and help countries elevate their economic status in order for the promotion of peace and prosperity throughout the world. Wilson’s policy emphasized morality, and the “nice guy” standpoint of how the US should carry out obligations. Consequently, President George Bush’s policy is a better reflection of President Theodore Roosevelt’s policy more than Taft’s or Wilson’s policy because of the military and political ideals that the two policies share.

President Bush’s post September 11 policy reflects Roosevelt’s is because of the swift, stern actions that Bush’s administration took after the attacks on the nation. As Bush sent the troops over to Iraq quickly and in great numbers, the administration sent a candid and stern message. The United States would not stand for an attack on its soil, and those who did so would receive grave punishment for their actions. This message echoes the morals behind the “big Stick” policy. Just as Theodore Roosevelt once said, “Speak softly and carry a big stick.” Theodore Roosevelt believed that power was an important and unavoidable thing in foreign affairs. He also noted in his addition to the Monroe Doctrine (called the Roosevelt Corollary) that if any nation in the Western Hemisphere appeared in a political or fiscal situation that would allow for European control, the US should intervene. With an imperialistic outlook on the world, Roosevelt made the US a nation that constantly intervened and helped Latin American countries avoid European interference in the Western Hemisphere. Examples of this lie in Theodore Roosevelt actions when he made Cuba a protectorate, took Guam and Puerto Rico, as well as when he ventured out and involved the United States in the counterinsurgency of the Philippines all in order to fortify the existence of democracy and Christianity and help the individuals of the nations govern themselves. These ideals and policies were mirrored in Bush’s actions when the US troops inhabited the Middle East, and the Bush administration took it upon itself to take advantage of their occupancy of the lands by spreading its ideals of democracy and ‘correct’ political procedures. By doing this, the Bush Administration had essentially identified these locations in the Middle East as lesser fortunate nations, deemed themselves fit to help these regions, and force their ‘help’ past the governments of the regions and to the people. This decision and series of actions greatly resembles the actions and opinions of Roosevelt’s Corollary.

Taft’s policy by contrast, was more of the United States venturing out to foreign land allowing for each foreign nation’s gradual acquiring of political and economic power through US investment in the countries’ infrastructures, which has little to do with Bush’s initial choice to attack the Middle East after September 11. Taft used "Dollar Diplomacy," instead of military force. He wanted control and to aid businessmen in the US, and was in strong favor of solving problems via economic means rather than militarily. He saw his policy as humanitarian, for stabilization improved the living scale and conditions. For instance, in Nicaragua during 1912, the government would default on its debts, which might mean European intervention. The US offered to loan money (by private men) if the US could have some supervision over Nicaraguan finances. Bush’s post September 11 policy does not mirror this because he was in favor of military force and making it known militarily that the US could not be attacked without grave punishment.

Wilson however based his policy on Morality. Bush’s post September 11th policy did not wholly reflect Wilson’s policy because Wilson’s Missionary policy aimed more in the direction of seeking peace and prosperity by means of creating pathways for institutions to branch out globally while Bush’s aim after the September 11 attacks was to retaliate forcefully and brutally (neither of which was peaceful). For instance, when the Japanese attempted, in the notorious Twenty-one Demands (1915), to reduce China almost to the status of a Japanese protectorate, he persuaded them to modify their conditions slightly. The 'Twenty-One Demands' required that China immediately cease its leasing of territory to foreign powers and to ascent to Japanese control over Manchuria and Shandong (Shantung) among other demands. Such persuasion as opposed to attack and forcefully making the US point reveals the difference between Bush’s and Wilson’s policy.

Consequently, it is evident that President Bush’s post September 11 policy best resembles Roosevelt’s “big stick” diplomacy. Roosevelt’s policy was based on pragmatism as well as the idea of the nation’s obligatory retaliation to threats and attacks on the nation’s soil. His belief in the United States’ obligation to help foreign nations in need of political/military assistance is also a part of his policy. After the September 11th attacks, each of these ideals was echoed in President George W. Bush’s new foreign policy in that he reacted to the tragedy through military retaliation and force. Additionally once occupying the lands, the Bush administration chose to assist the Iraqi people and help them acquire the democratic ideals the US holds so dearly.