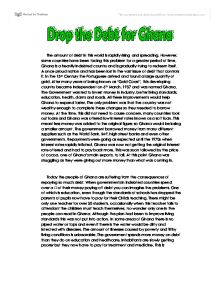 The amount of debt in this world is rapidly rising and spreading. However, some countries have been facing this problem for a greater period of time. Ghana is a heavily indebted country and is gradually trying to redeem itself. A once proud nation and has been lost in the vast issue of debt that controls it. In the 15th Century the Portuguese arrived and found a large quantity of gold. After many years of being known as 'Gold Coast', this developing country became independent on 6th March, 1957 and was named Ghana. The Government wanted to invest money in industry, better living standards, education, health, dams and roads. ...read more.

At this point Ghana was struggling as they were giving out more money than what was coming in. Today the people of Ghana are suffering from the consequences of repaying so much debt. When governments in indebted countries spend over a ? of their money paying off debt you can imagine the problems. One of which is education, even though the standards of schools has dropped the parents of pupils now have to pay for their Childs teaching. There might be only one teacher for over 50 students, occasionally when this teacher fails to attendant the children must teach themselves. No wonder only one in five people can read in Ghana. ...read more.

They must work long hours, some stretching to 12 hours for hardly any pay, possibly even 10p a day. Every week �140 million comes out of Africa in debt repayments without this figure there would be a better industry and therefore more developing potential. Ghana would be able to regain itself and give its people a better life. In 1999 the richer countries came together and promised to cancel �70 billion worth of debts, however, this was not enough to stable indebted countries financially. There are charities that are trying to help Ghana. Oxfam has put in wells that supply clean water and teach people about cleanliness and hygiene. Children in Need aims to help children learn new trading skills so they're not forced into child labour. You can help Ghana and many other countries if you campaign to drop the debt. By Lucy Cooper ...read more.