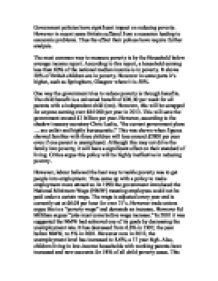 Government Policies aimed at reducing poverty in the UK

Government policies have significant impact on reducing poverty. However in recent years Britain suffered from a recession leading to economic problems. Thus the effect their polices have require further analysis. The most common way to measure poverty is by the Household below average income report. According to this report, a household earning less than 60% of the national median income is in poverty. It shows 20% of British children are in poverty. However in some parts it's higher, such as Springburn, Glasgow where it is 50%. One way the government tries to reduce poverty is through benefits. The child benefit is a universal benefit of �20.30 per week for all parents with a independent child (ren). However, this will be scrapped for anyone earning over �44 000 per year in 2013. ...read more.

However, labour believed the best way to tackle poverty was to get people into employment. Thus came up with a policy to make employment more attractive. In 1998 the government introduced the National Minimum Wage (NMW) meaning employees could not be paid under a certain wage. The wage is adjusted every year and is currently sat at �6.08 per hour for over 21's. However trade unions argue this is a "poverty wage" and demands an increase. However Ed Milliban argues "jobs must come before wage increase." In 2001 it was suggested the NMW had achieved one of its goals by decreasing the unemployment rate. It has decreased from 6.8% in 1997, the year before NMW, to 5% in 2001. ...read more.

Although Tony Blair's promise that he would end child poverty wasn't fully fulfilled, Labour did manage to reduce the number of children living in low-income households from 4.3 million in 1997 to 3.7 million in 2001. However as the governments main focus was trying to reduce child poverty, adults with no dependent children received less assistance and as a result people in this category living in low-income households raised from 3.6 million in 1997 to 3.9 million in 2002. Therefore, although benefits managed to reduce child poverty, they failed to prevent the number of working adults in low income households increasing. Thus benefits are only effective in reducing poverty to a certain extent. In conclusion, although the government failed to prevent a recession and a rise in unemployment, their benefits have helped thousands of children in poverty. Thus recent government policies that attempt to reduce poverty have been successful. Make smaller! ...read more.