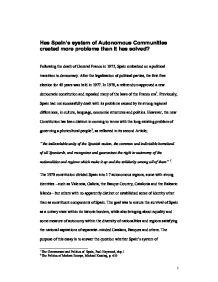 Has Spain&amp;#146;s system of Autonomous Communities created more problems than it has solved?

Has Spain's system of Autonomous Communities created more problems than it has solved? Following the death of General Franco in 1975, Spain embarked on a political transition to democracy. After the legalization of political parties, the first free election for 40 years was held in 1977. In 1978, a referendum approved a new democratic constitution and repealed many of the laws of the Franco era1. Previously, Spain had not successfully dealt with its problems caused by its strong regional differences, in culture, language, economic structures and politics. However, the new Constitution has been distinct in coming to terms with the long existing problem of governing a pluricultural people2, as reflected in its second Article; "the indissoluble unity of the Spanish nation, the common and indivisible homeland of all Spaniards, and recognizes and guarantees the right to autonomy of the nationalities and regions which make it up and the solidarity among all of them"3. The 1978 constitution divided Spain into 17 autonomous regions, some with strong identities --such as Valencia, Galicia, the Basque Country, Catalonia and the Balearic Islands-- but others with no apparently distinct or established sense of identity other than as constituent components of Spain. The goal was to ensure the survival of Spain as a unitary state within its historic borders, while also bringing about equality and some measure of autonomy within the diversity of nationalities and regions satisfying the national aspirations of separatist-minded Catalans, Basques and others. ...read more.

The former British ambassador to Spain, Brighty, says that the overwhelming majority of Spanish citizens still want to remain a single nation. Even the most enthusiastic nationalists today are content to say they are, first, a Basque or Catalan, second, a Spaniard, and, third, a citizen of Europe14. Also, Heywood writes that on the basis of surveys covering the 1976-87 period, "Spanish population was in favour of a state which was neither centralist nor broken up into independent units"15. Also, financial structure of Spain created as a result of the regional arrangements has increasingly contributed to a more equal Spain, which was the main goal of the creation of the Autonomous Communities. There are two basic income sources for the regions; tax revenues and grants. Tax revenues represent 25.90% and grants represent 72.80% of the autonomous government income. The main taxes are 'own taxes and fees' on which the autonomous governments have a full decision capacity, 'ceded taxes', that are an ensemble of state taxes and 'individual income tax sharing'. The Autonomous Communities receive 30% of the personal income tax collected in that region. The most important grants are the unconditional grant (PIE) (21.50% of the autonomous resources), grant for the financing of Health services and Social services (36.10%), Inter-territorial Compensation Fund (ICF) (1.55%)which is a conditioned grant devoted to the financing of investment projects in the poorest regions and European Funds (8.60%). ...read more.