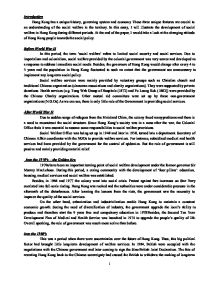 Hong Kong has a unique history, governing system and economy.

Introduction Hong Kong has a unique history, governing system and economy. These three unique features are crucial to an understanding of the social welfare in the territory. In this essay, I will illustrate the development of social welfare in Hong Kong during different periods. At the end of the paper, I would take a look at the changing attitude of Hong Kong people towards the social policy. Before World War II In this period, the term 'social welfare' refers to limited social security and social services. Due to imperialism and colonialism, social welfare provided by the colonial government was very scarce and developed as a response to address immediate social needs. Besides, the governors of Hong Kong would change after every 4 to 5 years and the population in Hong Kong fluctuated to such an extent that the government see unnecessary to implement any long-term social policy. Social welfare services were mainly provided by voluntary groups such as Christian church and traditional Chinese organization (clansman associations and charity organizations). They were supported by private donations. Health services (e.g. Tung Wah Group of Hospitals (1872) ...read more.

Overall speaking, the role of government was much more active than before. Into the 1980's This was a period when there were uncertainties over the future of Hong Kong. Thus, this big political factor had brought little long-term development of welfare services. In 1984, British were occupied with the negotiations with the Chinese government and later coming to sign the Sino-British Joint Declaration. The fate of reverting Hong Kong back to the Chinese sovereignty had caused the British to withdraw the making of long-term welfare plans. Into the 1990's At early 1990s, the government continued to carry on her incremental social policy. Incremental social policy was unstable which might easily be upset by a sudden surge in demand. So the government has considered the privatization of social services as an alternative or supplement to the prevailing incremental social policy. e.g. contracting out the meal services for the elderly by Social Welfare Department. Due to the migration of the locals during 1997, there was a serious 'brain-drain' problem. After the handover of the sovereignty in 1997, the political and administration structure had changed. ...read more.

As the people are more educated and being more exposed to different ideas, this facilitated the development of democracy. Also, people tend to be more aware of their rights as a citizen in Hong Kong. The concept that the government should be 'for the people and by the people' has been recognized by most people. Thus, the Government is facing a challenge to strike a balance between the people's expectations and her ability to provide social welfares. During this period of economic downturn, the people may want more from the government, but instead of providing more, the government decided to cut the expenditure on welfare due to huge budget deficit. So, it sounds like the government refuse to hear citizens' cries and demands. The communication gap between the government and her citizens widens. Conclusion Social policy is controversial and full of conflicts. What's more, the disfavoring of welfare provision in Hong Kong by the Central authorities had definitely hindered the government in providing more welfare service. The rigidity in the government may lead to disastrous problems and lead to social instability. Therefore, the Government must think thoroughly and consult the public whenever new policy is implemented. 18 1 ...read more.