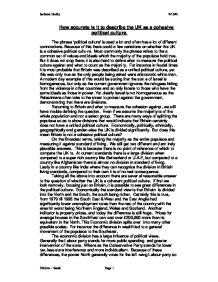 How accurate is it to describe the UK as a cohesive political culture?

How accurate is it to describe the UK as a cohesive political culture. The phrase 'political culture' is used a lot and often has a lot of different connotations. Because of this there could a few variations on whether the UK is a cohesive political culture. Most commonly the phrase refers to the a common set of values and ideals which the majority of the populace hold true. But it does not stop there; it is also hard to define what to measure the political culture against and what to count as the majority. For instance in feudal times it is most probable that Britain was described as a unified political culture, yet this was only true as the only people being asked were aristocratic white men. A modern day example of this would be stating that the state of Israel is homogeneous, but only as the current government ignores the refugees hiding from the violence in other countries and so only listens to those who have the same ideals as those in power. Yet clearly Israel is not homogeneous as the Palestinians often take to the street to protest against the government, demonstrating that there are divisions. ...read more.

Yet this has little affect of the political views of people as both major party seem to ignore this and even when it is a policy, it is normally overshadowed by more pressing concerns. But the division is there and is worth noting. Ethnicity is a major splitter of the politically culture; though it seems to have little affect on the actual politics that occurs. Most obviously is the violence in Northern Ireland. This difference spills over to many factors. Economically, N. Ireland is most probably in a worse state than it would have been. This division also affects voting with people choosing different parties due to their policies on these problems. Last but not least is class. The UK is classically ridden with class divisions. In the early 20th century it was still the case that class affected employment. Today it still is cited as a discrimination problem, despite John Major proclaiming that there was no longer any class divisions. A fine example is the fact the T.V programs (The Mark Thomas Product) are being made trying to find and ridicule such class differences and fight the 'Class War'. ...read more.

Removing these by focusing in lessens (but certainly does not remove) any differences. Political stances do become more focused with the removal of any nationalists, but all this does is concentrate attention on the Conservative/Labour (/Liberal Democrats possibly) differences. The electoral maps in the broadsheets are a good example of this. If we focus even further then again the differences again shrink, with local areas being more unified on voting (due to location and history e.g. a mining town will rarely vote Tory). But again (another one), there are exceptions. The closer you look, the bigger some differences are. A prime example is that national the BNP has little power and is often held in contempt showing that nationally the country is not racist. Yet in Oldham the BNP has power and support and that large parts of Oldham's population must agree with its ideals separating themselves from those whom don't. Look at the UK solely then it would be inaccurate to describe Britain's political culture as cohesive, as there are differences. But when considering other nations, then it is clear that despite the differences, the majority of the population all believe in the basics. Thus Britain is in fact a cohesive political culture, but only when the other worse possibilities are revealed. Jackson Heddy 9/10/01 Politics - Sarah Page 1 ...read more.