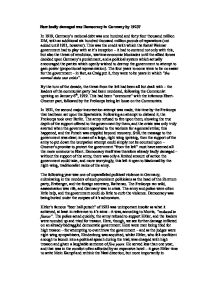 How badly damaged was Democracy in Germany by 1923?

How badly damaged was Democracy in Germany by 1923? In 1919, Germany's national debt was one hundred and forty four thousand million DM, with an additional six hundred thousand million pounds of reparations (not added until 1921, however). This was the credit with which the foetal Weimar government had to play with at it's inception - it had to contend not only with this, but also the threat of revolution, wartime economic blockades until the allied forces decided upon Germany's punishment, and a political system which actually encouraged the parties which openly wished to destroy the government to attempt to gain power (proportional representation). The four years to come were to be no easier for the government - in fact, as Craig put it, they were to be years in which "the normal state was crisis". By the turn of the decade, the threat from the left had been all but dealt with - the leaders of the communist party had been murdered, following the Communist uprising on January 6th, 1919. This had been "overcome" with the infamous Ebert-Groener pact, followed by the Freikorps being let loose on the Communists. ...read more.

Here were men being tried for high treason - for attempting to overthrow the government - and as the judges were right wing sympathisers, Hindenburg was acquitted, whilst Hitler, who felt confident enough to launch into a political speech during the trial, was charged with high treason and given a laughable sentence of five years. He served less than one year, and that was in the comfort often afforded by an expensive hotel - it gave Hitler time to write Mein Kampf and rethink the Nazi direction, but more importantly in reference to the question in hand, it showed the unwillingness of the institutions of Germany to punish the very people trying to overthrow it. So far, the Weimar government had received a vote of no confidence from both the army and the existing legal system - both left over from the reign of Wilhelm II. Further problems were to hit Germany, before the "clear" skies of 1924-29. In 1922, Germany asked the allies for an extension on her repayments, claiming there was no possible way for her to make them in full - it was refused, and by 1923, when she failed to keep up with repayments, the French took matters into their own hands and invaded the Ruhr. ...read more.

either way when it came to votes, to have some personal experience of when it failed them personally - in fact, this is true to such an extent that it would probably be a challenge to find somebody who had not been let down by the government. The economy had been poorly handled, and the citizens themselves could see that the government was badly supported. Then, compounding matters yet further, there was the ever-changing merry-go-round of coalitions that ruled Germany, just highlighting the inherent weakness in the government that was ruling the country. Having never really had the support of it's army or judicial system, being opposed to by large numbers of the ruling elite and influential industrialists, and alienating and losing the confidence of an immense proportion of it's populace, there is no way to hide the fact that democracy in Germany was very badly, if not fatally damaged - a theory backed up by the "years of recovery", whose dependence on foreign loans led to the massive extent of ruin caused by the Wall Street Crash and subsequent termination of loans to Germany, and ultimately gave cause to such discontent that people were desperate enough to vote Adolf Hitler into power in 1933. ...read more.