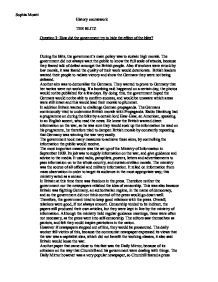 How did the government try to hide the effect of the blitz?

Sophia Moatti History coursework THE BLITZ Question 3: How did the government try to hide the effect of the blitz? During the blitz, the government's main policy was to sustain high morale. The government did not always want the public to know the full scale of attacks, because they feared talk of defeat amongst the British people. Also if workers were struck by low morale, it was feared the quality of their work would deteriorate. British leaders wanted their people to radiate victory and show the Germans they were not being defeated. Another aim was to demoralise the Germans. They wanted to prove to Germany that her tactics were not working. If a bombing raid happened on a certain day, the photos would not be published for a few days. By doing this, the government hoped the Germans would not be able to confirm success, and would be unaware which areas were still intact and this would lead their morale to plummet. In addition Britain wanted to challenge German propaganda. ...read more.

Although the ministry held regular guidance meetings, these were often not necessary, as the press went into self-censorship. The editors saw themselves as patriots, and felt they could inspire patriotism in the nation. However if newspapers stepped out of line, they would be prosecuted. The daily worker fell victim of this, because the communist newspaper expressed its views that the war was a capitalist idea, which did not benefit the working classes, it also said Britain would loose the war. Another paper that came close to this fate was the Daily Mirror, because of its criticism on the way that Churchill and his government were dealing with things. The Daily Mirror however was a very popular newspaper, so Churchill feared a press campaign would be his downfall, just as chamberlain had suffered in 1940. From then on the paper toned down. Newspapers tended to report in an upbeat fashion. If bombing occurred, no precise information was supplied, only positive comments made by citizens. Reports often used to concentrate on a particular family's story, so as to bring hope to other readers. ...read more.

B Priestly. At the time, film was one of the most powerful mediums of communication and was therefore used for propaganda during the war. Wartime propaganda in the form of short films and documentaries accompanied the main feature. These films were produced by the film division of the MOI in liaison with commercial studios, independent producers and news real companies, but the MOI always decided the message and the theme of the film. Over 1400 documentaries urging the British people for greater wartime effort and containing government instructions were made, but these were truly unpopular, as they were often very crude. Feature films were also produced; the aim was to make good films that contained messages from the government about the war. Posters with slogans were also used to warn, inform and encourage war effort. Slogans like " Your courage, Your cheerfulness, Your resolution, Will bring us victory" were widely disliked; they were often devised by the ministry of information to try to maintain morale. This was because Londoners felt they were living their lives the best they could, without the help of these brave patriotic slogans. Forced in front of their eyes by the MOI. ...read more.