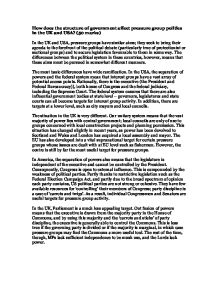 How does the structure of government affect pressure group politics in the UK and USA?

How does the structure of government affect pressure group politics in the UK and USA? (50 marks) In the UK and USA, pressure groups have similar aims; they seek to bring their agenda to the forefront of the political debate (particularly true of protectionist or sectional groups) and to secure legislation favourable to them in some way. The differences between the political system in these countries, however, means that these aims must be pursued in somewhat different manners. The most basic differences have wide ramification. In the USA, the separation of powers and the federal system mean that interest groups have a vast array of potential access points. Nationally, there is the executive (the President and Federal Bureaucracy)), both house of Congress and the federal judiciary, including the Supreme Court. The federal system ensures that there are also influential government bodies at state level - governors, legislatures and state courts can all become targets for interest group activity. ...read more.

They have few available resources for 'controlling' their members of Congress; party discipline is a case of 'carrots and twigs'. As a result, individual Congressmen and Senators are useful targets for pressure group activity. In the UK, Parliament is a much less appealing target. Out fusion of powers means that the executive is drawn from the majority party in the House of Commons, and by using this majority and the 'carrots and sticks' of party discipline, the executive is generally able to control the Commons. This is less true if the governing party is divided or if the majority is marginal, in which case pressure groups may find the Commons a more useful tool. The rest of the time, though, MPs lack sufficient independence to be mush use, and the Lords lack power. The difference is deepened by campaign finance rules - in the US, the party is limited and so candidates rely on the financial and organisational support of interest groups, and when elected will owe a debt of loyalty to their 'sponsor'. ...read more.

Only 'insider' groups are likely to be consulted on policy decisions. In the USA, the judiciary is a valid target because of the Supreme Court's power of judicial review. Consequently, interest groups may bring cases themselves, or file 'amicus curiae' briefs in relevant case, eg. around 80 such briefs were filed in Webster v RHS on the abortion issue in 1987. British courts have no equivalent power, but the European Convention on Human Rights has encouraged pressure groups to bring test cases, eg. by supporting Diane Blood over the right to die. In conclusion, the structure of government means that groups in the USA can obtain the desired results in many different ways - by financing elections, lobbying at national, state or local level, bringing court cases and so on. This supports a pluralist model, in which numerous groups are able to have an influence on decision making. In the UK, the system narrows down the choice of targets to the executive. This leads to a corporatist style system where only a few key 'insider' groups are able to have a real influence by consultation with government. ...read more.