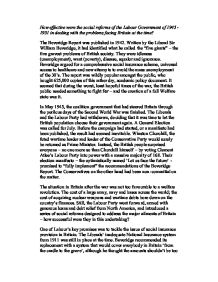 How effective were the social reforms of the Labour Government of 1945-1951 in dealing with the problems facing Britain at the time?

How effective were the social reforms of the Labour Government of 1945-1951 in dealing with the problems facing Britain at the time? The Beveridge Report was published in 1942. Written by the Liberal Sir William Beveridge, it had identified what he called the "five giants" - the five gravest problems of British society. They were idleness (unemployment), want (poverty), disease, squalor and ignorance. Beveridge argued for a comprehensive social insurance scheme, universal access to healthcare and new attempts to avoid the mass unemployment of the 30's. The report was wildly popular amongst the public, who bought 625,000 copies of this rather dry, academic policy document. It seemed that during the worst, least hopeful times of the war, the British public needed something to fight for - and the creation of a full Welfare state was it. In May 1945, the coalition government that had steered Britain through the perilous days of the Second World War was finished. The Liberals and the Labour Party had withdrawn, deciding that it was time to let the British population choose their government again. A General Election was called for July. Before the campaign had started, or a manifesto had been published, the result had seemed inevitable. Winston Churchill, the feted wartime leader and leader of the Conservative Party would surely be returned as Prime Minister. Instead, the British people surprised everyone - no one more so than Churchill himself - by voting Clement Atlee's Labour Party into power with a massive majority of 168. ...read more.

When it came into operation on July 5th 1948, the NHS was extremely popular. People who "would never have dreamed of going to the doctors for themselves", suddenly had free access to the whole range of medical services - and they used it. So much so that the cost of the NHS quickly spiralled out of control. Beveridge had anticipated that the cost of the NHS would be around �170 million a year and that this would stay fairly static or even go down. In fact, by 1951 the NHS budget had reached almost �328 millions, almost double Beveridge's prediction. The NHS was largely funded through income tax (there was a little bit in National Insurance that went to health). In an attempt to recoup some of the cost of the NHS, charges were introduced for some services in 1951 - Bevan resigned in disgust at the move. In some sense, the NHS was a victim of its own success. Still, this particular welfare reform was a great success for the Labour Party. The NHS remains a symbol (an increasingly isolated one) of the Welfare state at its fairest and best - an icon of collectivism in the sea of the increasingly privately funded Welfare State. A 1944 White Paper on Employment Policy had committed the government to "maintaining a high and stable level of employment after the war". There was a definite sense in the country that a return to the three million unemployed of the 30's could not, and would not, be tolerated. ...read more.

It was biased against working class children who failed in the 11 plus exam and were therefore written off as academically untalented for the rest of their lives. Some Historians have suggested that the educational and class backgrounds of leading Labour members can account for this short sightedness in this regard. Characters like Atlee, Cripps and Dalton had received Private education and people like Bevan and Shinwell had received no formal education at all - they didn't really understand the needs of the working class when it came to education. The Education Act was still a vast improvement on the previous legislation and it certainly laid the groundwork for the truly egalitarian educational system that was introduced in the 1960's. To conclude, it has been demonstrated that Labour's social reforms represented a full-scale assault on the five giants of the Beveridge report. When Joseph Rowntree repeated his research into poverty, he found that levels of absolute poverty had fallen from 36% in 1936 to 2% in 1950. They created the 'jewel in the crown' of the Welfare state, the National Health Service, and can be accredited with the creation of the 'safety net', which insured that all citizens had a basic standard of living. They protected the 'miracle' of full employment, which meant that everyone in Britain who was willing to earn a living was able to. Yet, they didn't deal with the problem of homelessness to a reasonable degree and left the Education system improved - but still starkly unfair. Their record is one of successes and failures, equality and inequities, yet, there can little doubt at all that they left Britain in a superior state to that which they found it. ...read more.