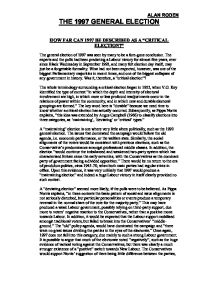 HOW FAR CAN 1997 BE DESCRIBED AS A "CRITICAL ELECTION?" The general election of 1997 was seen by many to be a fore-gone conclusion. The experts and the polls had been predicting a Labour victory for almost five years, ever since Black Wednesday in September 1992, and many felt election day itself, may just be a forgettable formality. What had not been expected, however, was one of the biggest Parliamentary majorities in recent times, and one of the biggest collapses of any government in history. Was it, therefore, a "critical election"? The whole terminology surrounding a critical election began in 1955, when V.O. Key identified the type of contest "in which the depth and intensity of electoral involvement are high, in which more or less profound readjustments occur in the relations of power within the community, and in which new and durable electoral groupings are formed." The key word here is "durable" because we need time to know whether a critical election has actually occurred. Subsequently, as Pippa Norris explains, "this idea was extended by Angus Campbell (1966) to classify elections into three categories, as 'maintaining', 'deviating' or 'critical' types." A "maintaining" election is one where very little alters politically, such as the 1992 general election. The issues that dominated the campaign would follow the old agenda, i.e. economic performance, or the welfare state. Similarly, the social alignments of the voters would be consistent with previous elections, such as the Conservative's predominance amongst professional middle classes. ...read more.

no longer the party of economic competence, whilst at the same time, Labour became a party conceived as being strong, united and capable of governing. The party also enjoyed huge membership, becoming the fastest growing political party in Europe and in addition, there was also a significant increase in the number of women MPs, combined with Labour's apparently successful attempt to make politics more modern and appealing to the voters. Penultimately, is the question of new social alignments - paramount for an election to be called "critical." Not surprisingly, therefore, 1997 achieved this criteria with huge Labour advances into traditionally Conservative areas of support. As John Curtice explains, "as in Scotland and Wales, so also across Great Britain as a whole, the Conservatives' principal problem is that their vote has become too geographically evenly spread." The South of England swung enigmatically towards Tony Blair, with almost 50% of the London vote, and even a 12% swing in the South East. the gender gap was breached, with 47% of women (traditionally more conservative) voting for Labour, the same statistic as men. The middle class professionals, Margaret Thatcher's key support-base, voted this time with Labour - 49% of C1s and 56% of C2s, although it can also be noted that the move towards Labour was almost the same in each social grade. Nonetheless, the changes were there for all to see, including incredibly rare moves such as some Tories refusing to vote (perhaps as much as 29% of supporters) ...read more.

Curtice notes that "they still managed to win 3% more of the vote than Labour did in 1983, when Michael Foot received a drubbing at the hands of Margaret Thatcher." However, this evidence all fades into near obscurity when faced with the size of the Labour victory, which is no doubt the result of a very "critical election." The political system of Britain has finally shattered. After 18 years of pushing against the walls, they finally gave way in 1997. It was a "critical election" to rank alongside, or even above, any in British history, setting the scene for a new era of politics. The statistics themselves almost tell the story - a 179 seat majority for Labour, only 165 seats for the previous government and a national average swing of almost 13%. The issues at stake had been new and different - a single currency? a Scottish Parliament? a minimum wage? The voting behaviour of Britain significantly altered - traditional Conservative supporters all turned their allegiance to Labour, such as southern voters, women and middle-class professionals. The party system was affected so much that it not only destroyed the Conservative dominance, but by-passed any suggestion of two-party dominance and started an era of Labour dominance. In years to come, I believe 1997 will be looked upon as the definition of how to produce a "critical election." ?? ?? ?? ?? ALAN RODEN THE 1997 GENERAL ELECTION ...read more.