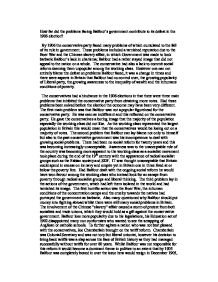 How far did the problems facing Balfour's government contribute to its defeat in the 1906 election?

How far did the problems facing Balfour's government contribute to its defeat in the 1906 election? By 1906 the conservative party faced many problems of which cumulated to the fall of its rule in government. These problems included a tarnished reputation due to the Boer War and the Chinese slavery affair, in which Government was made to look barbaric Balfour's lack in charisma; Balfour had a rather stayed image that did not appeal to the nation on a whole. The conservative had also a lack to commit social reform deeming them unpopular among the working class. However one can not entirely blame the defeat on problems Balfour faced, it was a change in times and there were aspects in Britain that Balfour had no control over, the growing popularity of Liberal party, the growing awareness to the inequality of wealth and the inhumane conditions of poverty. The conservatives had a hindrance in the 1906 elections in that there were three main problems that inhibited the conservative party from obtaining more votes. ...read more.

Had Balfour dealt with the ongoing social reform he would have won favour among the working class who instead look for an escape from poverty through radical socialist groups and liberal thinking. The third problem lay in the actions of the government, which had left them isolated in the world and had tarnished its image. The first horrific action was the Boer War, the inhuman conditions of the concentration camps and the cruelty towards the natives had portrayed the government as barbaric. Also many questioned why Balfour should put money into fighting abroad whilst there were still many social problems in Britain. The involvement of the Chinese "slavery" affair caused a storm of protest from both socialists and trade unions, which they would hold as a gift against the conservative government. Balfour loss more popularity due to his legislations, his Education act of 1902 disappointed many non conformists who wanted to see the scrapping of Anglican or catholic schools. To further agitate a nation who was not best pleased with the conservatives, Joe Chamberlain brought on the tariff reform. ...read more.

It was a time of social reform Balfour had no power of repressing this and did little to embrace it. This social reform would lead to the rise and interest in other parties that supported and sympathised with the working class. Balfour could not stop the grow interest in the liberal party and other socialist parties. The results of 1906 elections show that the conservatives did not loose many votes but the liberal gained landside results largely due to the first past the post policy. By 1906 Balfour was faced with many problems, which mostly stemmed from the extremity of poverty growing self-awareness of social inequalities. Balfour himself didn't win over much favour due to his poor decisions over both the Boer War and Chinese slavery affair and his unappealing personality. However these problems could not wholly be held responsible for his landslide defeat in 1906, the social reform and growing popularity of liberal and socialist thought would detain votes from Balfour. Whilst the conservatives prolonged service in government would lose the interest and vote of voters who grew bored of the way conservatives ran the country. ...read more.