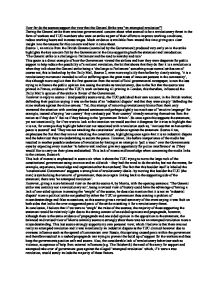 How far do the sources support the view that the General Strike was &quot;an attempted revolution&quot;?

How far do the sources support the view that the General Strike was "an attempted revolution"? During the General strike there was true governmental concern about what seemed to be a revolutionary threat in the form of workers and TUC members who went on strike as part of their efforts to improve working conditions, reduce working hours and increase wages. Much evidence is available from around this time giving us a clear insight into the reasons for this concern and how it came about. Source 1, an article from the British Gazette (controlled by the Government) produced very early on in the strike highlights the key concern felt by the Government at the time supporting both the statement and introduction: 'The General strike is a challenge to Parliament and the road to anarchy and ruin' This quote is a direct example of how the Government viewed the strikers and how they were desperate for public support to help reduce the possibility of a national revolution, the bit that shows that they do fear it is a revolution is when ...read more.

Source 4 too, emphasises the fact that they are not attacking the constitution, highlighting once again that it is an industrial dispute and the behaviour they are undertaking to secure the peace. However, like before inexperience of the media has resulted in another possible undertone of revolution by hinting at an attempt to 'pull a wool' over the Governments eyes by expecting every member 'to behave well and not give any opportunity for police interference' as if they would like to carry on their plans undisturbed. This lack of means and knowledge when concerning the media links to the cartoon, Source 6. This lack of means is emphasised in source six when it shows the TUC trying to move the large rock of the constitutional government using one man and an old stick - they had the mind to do the strike, but not the means, for example, experience, knowledge and organisation9or the numbers) The fact that this boulder itself is labelled the 'constitutional Government' suggests a strong hint of revolutionary ideals- by moving this boulder the TUC (the man) ...read more.

claimed however due to overseas influence such as the spread of communism over Russia, this uprising caused panic within the government and therefore resulted in a rushed propaganda war trying to prevent the build up of support for the workers and thus keep the governments position safe and secure. Also, the considerable lack of revolutionary behaviour such as violence, acceptance of help from external influences (e.g. The Bolshevik) the need of the army for support and attempted take over of government goes against the alleged 'attempted revolution' which, if it were a true revolution, would surely include the majority of these factors. * Mr Baker said i needed to mention more about the sources 'weight' throughout the essay and also briefly explain what we mean by the term 'weight', you know, like its heavy if it is not one sided and light if it is... * I also needed to include some of the points of my conclusion more throughout the essay too. ? Don't quite get that one but it may help u i dunno? * Hope this helps!!!!! ...read more.