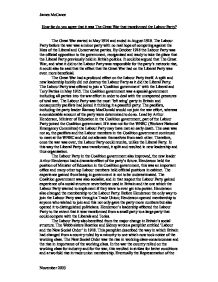 How far do you agree that it was The Great War that transformed the Labour Party?

Whichever party was to follow World War One in power was going to have to give the working class what they wanted because for the first time they were conscious of what they wanted. The Labour Party served their needs. After the war the newly enfranchised working class and not to mention women had fought for something. One might say they fought for their country or the imperialists who started the war; but truly it was for a better world. After time the debate over whether or not to enter the war was forgotten and the people thought about finishing it more so than the war's beginning. In this period of contemplation the people realised that once it was over the world had be a better place. David Lloyd George used the phrase 'Brave New World' and that perfectly describes the hopes and dreams of Britain. The Representation of the Peoples Act had made it so that whoever gave the people this 'Brave New World' would win the working class' support. The Conservative/Liberal Coalition which continued after the war did not ideologically believe in giving the working class a better life, the only vote which would bring them their 'Brave New World' was the Labour Party. ...read more.

Asquith of course declined and lost his last chance to ever repair the Liberal Party. Dangerfield did not believe that this was a consequence of the war but an on going crack which would have opened in time. It is more acceptable to believe that the war was far too much pressure for two such personalities so strongly opposed. It was not so much the personalities which determined who won but the attitudes of the country; Liberalism was an old ideology now overshadowed by much more interventionist politics which Lloyd George had shown worked before and during the war. Liberalism could not live up to the 'Brave New World' and indeed the war which fought for it. The dramatic change in popular attitudes towards politics, class and the justification of the working class' genuine right for political power changed Britain socially. The change created heavy pressures on the old Liberal doctrine and thus in a great war such as this only the strong survive. Liberalism was not strong enough to survive the war and with it died Liberalism's last real master. The 'Brave New World' which the war had created and Lloyd George had coined was to be the era of Labour; the Great War transformed not only the Labour Party but transformed British society in the Labour Party's favour. ...read more.