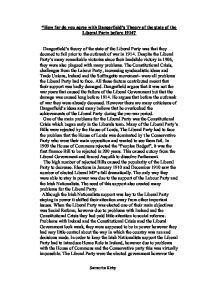 &quot;How far do you agree with Dangerfield's Theory of the state of the Liberal Party before 1914?

With the extension of the franchise the working class had found a political voice and the rise of the Labour Party saw many of the working class turning to the Labour Party for political representation. The ever increasing number of Trade Unions and the increasing popularity in syndacalistic ideas made a decline in the support for the Liberal Party more popular. The number of strikes organised by trade unions increased dramatically between 1911 and 1914. The number of days lost through strikes by 1912 had risen to 40, 8900. Strikes took place in vital industries such as the railways, mines and the docks. Workers demanded betters working conditions, higher pay and improved working hours. Low numbers in unemployment made strikes easy to achieve and extremely effective. Many people had begun to believe that Trade Unions were the way forward as representation as the government were poor representation and achieving very little. The Liberal Government also faced the continual problem of the demand for women to be able to vote and the Suffragette movement. The Suffragettes mainly consisted of middle class women who demanded the vote as a symbol of equality, they were led by the Pankhurst family. ...read more.

Although the Liberal Party appeared to be losing out to Labour this was not the case and would contradict the argument that the Liberal Party were weakening considerably before World War 1. The Liberal party also retained the majority of elected seats in the two elections held in 1910. Although their number of elected seats had decreased the Liberal Party still retained the majority and remained in power. In the January 1910 election the Liberal's 273 elected seats and in the December 1910 elections achieved 272 elected seats . This suggests that they were not doomed as they were able to remain in power. Although the Liberal Government faced many problems during their time in power, they were still able to achieve many successes. They introduced many social reforms and the Parliament Act 1911 was revolutionary in politics. Election results also suggest that the Liberal Government were not heading for failure but proceeding to continue strongly. I therefore contradict Dangerfield's theory that the Liberal government were doomed to failure prior to World War 1, suggesting that they were still a strong government. It would be easy to make assumptions looking back in hindsight as Dangerfield did, however I would argue that upon entering World War 1 the Liberal Party still appeared to be strong. Samantha Kirby ...read more.