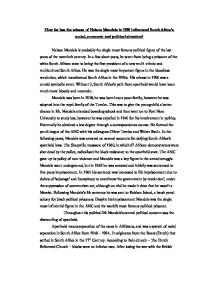 How far has the release of Nelson Mandela in 1990 influenced South Africa's social, economic and political situation?

How far has the release of Nelson Mandela in 1990 influenced South Africa's social, economic and political situation? Nelson Mandela is probably the single most famous political figure of the last years of the twentieth century. In a few short years, he went from being a prisoner of the white South African state to being the first president of a new multi-ethnic and multicultural South Africa. He was the single most important figure in the bloodless revolution, which transformed South Africa in the 1990s. His release in 1990 was a crucial symbolic event. Without it, South Africa's path from apartheid would have been much more bloody and uncertain. Mandela was born in 1918; he was born into a poor family, however he was adopted into the royal family of the Tembu. This was to give the young child a better chance in life. Mandela attended boarding school and then went on to Fort Hare University to study law, however he was expelled in 1940 for his involvement in politics. Eventually he obtained a law degree through a correspondence course. He formed the youth league of the ANC with his colleagues Oliver Tambo and Walter Sisulu. In the following years, Mandela was arrested on several accounts for defying South Africa's apartheid laws. The Sharpville massacre of 1960, in which 67 African demonstrators were shot dead by the police, radicalised the black resistance to the apartheid state. The ANC gave up its policy of non-violence and Mandela was a key figure in the armed struggle. Mandela went underground, but in 1962 he was arrested and initially was sentenced to five years imprisonment. In 1964 his sentence was increased to life imprisonment due to claims of 'sabotage' and 'conspiracy to overthrow the government by revolution', under the suppression of communism act, although on trial he made it clear that he wasn't a Marxist. Following Mandela's life sentence he was sent to Robben Island, a harsh penal colony for black political prisoners. ...read more.

Apartheid was falling apart, and the country was on the verge of civil war. There was a "Free Nelson Mandela" campaign from abroad and much support for Mandela and the ANC. The US government said that they would increase trade sanctions on South Africa if Mandela wasn't released and the United Nations also demanded his release. There was also a lot of violence within South Africa and the state of emergency was failing to deal with the problem. The government was struggling to keep control of the situation and knew the country was under threat from civil war. There was, in a way, no other choice to stop the violence but to release Nelson Mandela. Meanwhile Nelson Mandela, still in prison was despising apartheid but the government appreciated his non-aggressive approach and they believed that he could help to restore peace. President de Klerk argued that in the face of growing violence it was in the interest of all to begin a process of political negotiation to establish a new and just constitutional dispensation. Although de Klerk was in a position of Ascendancy for apartheid and a strong member of the National Party he realised that apartheid system could not carry on and made the bold move of bringing it to an end. Mandela was finally released on Sunday 11th February 1990. His speech when he first spoke to the people of South Africa for over 20 years was very humbling, down to earth and modest - "I stand before you, not as a prophet, but as a humble servant... the factors which necessitated armed struggle still exist. We hope that a climate conductive to a negotiated settlement will exist soon." He was very peaceful, and did not want revenge for his many years of imprisonment. Later in 1991 the Convention For A Democratic South Africa (CODESA) was set up. Even through Mandela was released there were still many problems. ...read more.

There is also a fairer legal system with fair courts and blacks are no longer discriminated against. Crime is still a major issue with some areas seeing high levels of murders, muggings and rape. White areas often have security guards, which does give a feeling of separation in the community. On the positive side political violence has decreased, although criminal violence is up. AIDS and drugs are a problem and there has been a failure to recognise the severity of the problem, and not enough done to stop the cause. There is not enough funding to research the problem properly. Education has made some progress but large numbers of the black population are unable to read or write. More schools and teachers are needed, and it also needs more funding. This is a problem that requires time to improve for new schools need to be built and teachers need to be trained. The Truth and Reconciliation Commission are looking after the past of South Africa. This organisation has been set up to examine the impact of apartheid and to identify those who were guilty of abuses. The system has worked quite well, particularly for it's on a fairly small budget. It is found to be controversial because there is a feeling that whites are taking blame and black violence is not considered to the same extent or degree. The economy has improved slightly because unemployment is down. South Africa has recently hit a bit landmark, securing the 2010 World Cup. This shows that they are now accepted within society. The world cup will also help economically bringing in many new jobs and improving their unemployment rates. I think since the end of apartheid South Africa as a nation Socially has come along way even there still is much left to improve. Economically the country is becoming more stable, getting a flowing economy up and running and Politically the country is doing well, the parties are at agreement and are now social democrats. ?? ?? ?? ?? ...read more.