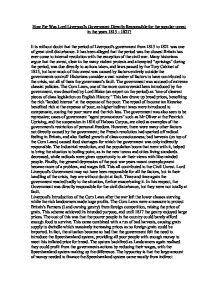 How Far Was Lord Liverpool's Government Directly Responsible for the popular unrest in the years 1815 - 1821?

How Far Was Lord Liverpool's Government Directly Responsible for the popular unrest in the years 1815 - 1821? It is without doubt that the period of Liverpool's government from 1815 to 1821 was one of great civil disturbance. It has been alleged that the period was the closest Britain has ever come to internal revolution with the exception of the civil war. Many historians argue that the unrest, clear in the many violent protests and attempted "uprisings" during the period, was due directly to actions taken, and laws passed by the Tory Cabinet of 1815, but how much of this unrest was caused by factors entirely outside the governments control? Historians consider a vast number of factors to have contributed to the crisis, not all of them the government's fault. The government was accused of extreme classist policies. The Corn Laws, one of the more controversial laws introduced by the government, was described by Lord Blake (an expert on the period) as "one of clearest pieces of class legislation on English History." This law drove up bread prices, benefiting the rich "landed interest" at the expense of the poor. The repeal of Income tax likewise benefited rich at the expense of poor, as higher indirect taxes were introduced to compensate, costing the poor more and the rich less. ...read more.

Once the war had ended, the government still desperately needed the funding it represented, however gave in to pressure from backbencher MPs as the tax was progressive and therefore affected the rich to a greater degree. The Government needed to replace these lost funds, and to do so increased indirect taxation on the purchase of goods. This of course took a huge toll on the poorer people, who had had barely enough to survive on previously. These measures also inspired outrage from middle and lower class activists, as the government was again taking measures that would benefit only the rich landed gentry. The protest at these actions may have continued peacefully had the government not violently suppressed supposedly peaceful gatherings and imprisoned influential radical figures. Henry hunt, a leading propagator of the idea of parliamentary reform through constitutional methods was implicated in Rioting in London in which he had no part, reinforcing the feeling of Government suppression of new ideas. The Spa Fields Riot, where a small splinter group of an essentially peaceful meeting attempted armed revolt, was used by the government as an excuse to introduce alarming new measures including the suspension of Habeas Corpus (freedom from imprisonment without trial) ...read more.

The growth of an upwardly-aspiring middle class, that resented the Aristocrats arrogant superiority, because of the growth of towns, led to radicals having a politically interested demographic from which to recruit. However, Taken overall Lord Liverpool's Government created Laws that were class discriminate. They had therefore shown themselves to the general populace to be interested primarily in their own gain, and not the general welfare of the people. In this respect, they are directly responsible for all the unrest that followed. The Laws exacerbated existing problems caused by the French Revolution, bad harvests, and economic downturn, and the repression of personal freedom and expression through the implementation of the six acts, caused those dissidents to take radical action to make their grievances heard. The Government handled the initial unrest badly responding with force when a more diplomatic response would have been more appropriate. Eventually, it is true that the Government ended the series of disturbances, but only through a policy of harsh retaliation to any radical opposition. The Government may have prevented a worse situation from developing, but that does not change the fact that Liverpool's Government was almost completely responsible for the general unrest that did occur in the years 1915 to 1921, whether from wrong actions or merely inaction. Top of Form 1 ...read more.