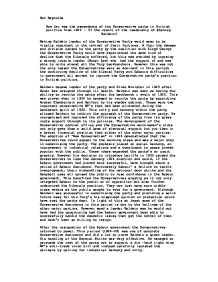 How far was the ascendancy of the Conservative party in British politics from 1923 - 37 the result of the leadership of Stanley Baldwin?

How far was the ascendancy of the Conservative party in British politics from 1923 - 37 the result of the leadership of Stanley Baldwin? Making Baldwin leader of the Conservative Party would seem to be vitally important in the revival of their fortunes. After the damage and division caused to the party by the coalition with Lloyd George the Conservative Party could have experienced the same kind of decline that the Liberals suffered, but this was avoided by imposing a strong interim leader (Bonar Law) who had the support of and was able to unite almost all the Tory backbenchers. However this was not the only reason the Conservatives were so dominant in this period; the continuing decline of the Liberal Party and Labours difficulties in government all served to improve the Conservative party's position in British politics. Baldwin became leader of the party and Prime Minister in 1923 after Bonar Law resigned through ill health. Baldwin was seen as having the ability to reunite the party after the backbench revolt of 1922. This was proven when in 1924 he managed to reunite the party by appointing Austen Chamberlain and Balfour to his shadow cabinet. ...read more.

In light of this at least some of the Conservative dominance in this period is due to the failings of the other major parties. However good a leader Baldwin was he would not have had the opportunity had the Labour government been able to successfully handle the domestic issues that got the better of them and hadn't been so willing to resign. After the resignation of the Labour government the Conservatives returned to power. This period (1924-29) was one of complete Conservative dominance and did a lot to prove Baldwin a great leader. His handling of the General Strike was very effective. He managed to persuade the rest of the party not to support a die-hard right wing MP's anti-trade union bill and instead carefully isolated the strikers by calling for industrial harmony and unity. In the wake of the Great War Baldwin managed to capitalise on the nation's desire for peace both at home and internationally. He used this to turn public opinion against the strikers, whom he declared were trying to undermine constitutional government, and ensure his reputation as a fair and honest PM was maintained. ...read more.

Coupled with his ability to offer new and insightful policies under " New Conservatism" while the Liberals offered merely discussion about reform without offering actual policies. Baldwin's support for the coalition government under MacDonald was also instrumental. His support was key to the formation of the National Government with MacDonald as its leader. This was another shrewd political decision as it ensured that whilst the coalition reigned, the Conservatives would have a lot of say in how it was run, as it was another mainly Conservative coalition. Baldwin was also able to see that a coalition under MacDonald would have much more appeal domestically and internationally than a Conservative led one. Baldwin was very important in ensuring the Conservatives were a dominant political force in this period. However he did profit largely from the circumstances of the time, such as the continued decline of the Liberal Party, the failings of Labour governments and the Conservative Party's willingness to accept him as leader. Despite his fortune though Baldwin was the most important factor in the revival and sustenance of the Conservative Party in this period. Ben Reynolds ...read more.