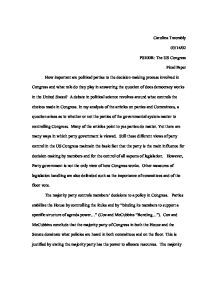 How important are political parties to the decision-making process involved in Congress and what role do they play in answering the question of does democracy works in the United States?

Carolina Twombly 03/14/02 PS100B: The US Congress Final Paper How important are political parties to the decision-making process involved in Congress and what role do they play in answering the question of does democracy works in the United States? A debate in political science revolves around what controls the choices made in Congress. In my analysis of the articles on parties and Committees, a question arises as to whether or not the parties of the governmental system matter to controlling Congress. Many of the articles point to yes parties do matter. Yet there are many ways in which party government is viewed. Still these different views of party control in the US Congress maintain the basic fact that the party is the main influence for decision-making by members and for the control of all aspects of legislation. However, Party government is not the only view of how Congress works. Other measures of legislation handling are also defended such as the importance of committees and of the floor vote. ...read more.

The stronger the leadership within the party, the more homogeneous the preferences, the more control the party has over legislation. Another article that supports the conclusion that parties do matter in Congress is Aldrich, Berger, and Rohde. This is also justified by the claim of conditionality. "Conditional Party Government", or CPG is varies in strength with the "variability in the preferences legislators seek to reveal publicly and enact legislatively" (Aldrich, Berger, and Rohde 25). When a party is more homogeneous in preferences, and the two parties have different ideologies, then that that party which is in control will dominate policy decision-making positions in its party affiliates. This is because the member that is associated with the party in charge will vote with the party if that will enhance his or her goals as well. In Aldrich, Berger, and Rhode, Parties do matter to the preferences of what legislation will be addressed in Congress. Sinclair, in her article about task forces, mentions that leadership in Congress must promote "Keeping peace within the family." ...read more.

For example, the Appropriations Committee in the House has had relatively small change in procedures which has lead to a belief that members within this committee will spend more time on issue within its expertise then those outside of it. Within these articles, I found that the party does matter to legislative politics. A member's party affiliation affects how he will vote and what he will promote in policy legislature. Avoiding the party leadership's suggestions could result in a lack of attention for the policies the member promotes. When the legislator's party is in power (the majority in Congress), then its effects are more noticeable. A member who supports the party will have more of a chance to have his legislation heard. This does support the fact that democracy does work in America. The Constituents that vote for the Congress member affiliate themselves with a particular party. This party has a specific ideology. When in Congress if this party is in the majority, then those issues that promote the ideology of the party will be promoted. So party government in Congress is important when conditions are satisfied to promote its ideology. . ...read more.