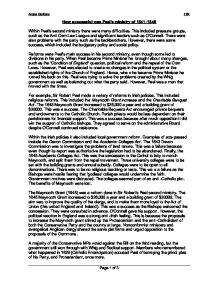 How successful was Peel's ministry of 1841-1846 Within Peel's second ministry there were many difficulties. This included pressure groups, such as the Anti Corn Law League and significant leaders such as O'Connell. There were also problems with the party such as the backbenchers. However, there were some success, which included the budgetary policy and social policy. Reforms were Peel's main success in his second ministry, even though some led to divisions in his party. When Peel became Prime Minister he brought about many changes, such as the 'Condition of England' question, political reform and the repeal of the Corn Laws. However, Peel was elected to create no changes in the political system or the established rights of the Church of England. Hence, when he became Prime Minister he turned his back on this. Peel was trying to solve the problems created by the Whig government as well as balancing out what the party said. However, Peel was a man that moved with the times. For example, Sir Robert Peel made a variety of reforms in Irish policies. This included religious reforms. This included the Maynooth Grant increase and the Charitable Banquet Act. The 1845 Maynooth Grant increased to $26,000 a year and a building grant of $30000. This was a success. The Charitable Bequests Act encouraged private bequests and endowments to the Catholic Church. ...read more.

This Act outlawed underground work for women, girls and boys under 10 (rather than Ashley's original proposal of 13). Graham's Factory Bill of 1843 was dropped following Nonconformist opposition to the leading role given to the Anglican clergy in the proposed schools. The bill attempted to regulate hours of work for children, and to provide them with schooling. Finally, both Peel and Graham accepted orthodox political economy and sympathised with the mill owners' case. Peel believed that prosperity was the best way to remove social problems, not legislation. Finally, Business confidence and regulation was another success for Peel. This included three major acts. This included; the Bank Charter Act of 1844, the Companies Act of 1844 and the Railways Act of 1844. The Bank Charter Act aimed to increase confidence in the banking system by giving grater control over bank note issue, the Companies Act set out to regulate and control 'reckless speculation'. The Railways Act increased government powers of regulation an inspection and protected the interests of pooper trailers. One of Peel's responsibilities as Prime Minster was to explain and defend his policy in the House of Commons. While Peel tried to repeal the Corn Laws, he failed to do this, because he did not argue enough why he wanted this. Corn Laws and Maynooth was his biggest political blunders. ...read more.

As a result, Peel ignored his backbenchers and got full support from the cabinet. For example Maynooth grant increase of 1845. Even though this reform was successful, it brought Peel down as many Party members had been elected in 1841 to protect the Church of England form further attack. This is because their government was now preparing to offer Roman Catholicism in Ireland. Rebel backbenchers rejected the worldly Conservative arguments that justified the policy. This because they felt betrayed. Peel could not poise with religion with foreign matter without being punished. There are two finial reasons why the backbenchers were resentful. One was that many of Peel's backbenchers held a very different view on the role of the role of government, and did not feel that his polices were 'Conservative' at all. The second reason was that they would be 'followers in drill'. These feeling were shown during the 1844 session with its controversies over factory reform and alteration of sugar duties. To conclude Peel's second ministry it was successful in the sense, Peel helped the nation. However, this was not enough to survive as party leader. Peel had listened to his party members he may have survived. This is because it would have stopped the resentment from growing. Also after 1841 he was seen as much of an opportunist. This widened the gap between leader and party. It also that Peel very much believed that nation came before party and hence, led to his downfall. Anjna Galliara 12K Page 1 of 3 ...read more.