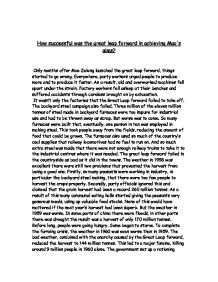 How successful was the great leap forward in achieving Mao's aims?

How successful was the great leap forward in achieving Mao's aims? Only months after Mao Zelong launched the great leap forward, things started to go wrong. Everywhere, party workers urged people to produce more and to produce it faster. As a result, old and overworked machines fell apart under the strain. Factory workers fell asleep at their benches and suffered accidents through careless brought on by exhaustion. It wasn't only the factories that the Great Leap forward failed to take off. The backyard steel campaign also failed. Three million of the eleven million tonnes of steel made in backyard furnaces were too impure for industrial use and had to be thrown away as scrap. But worse was to come. So many furnaces were built that, eventually, one person in ten was employed in making steel. This took people away from the fields, reducing the amount of food that could be grown. The furnaces also used so much of the country's coal supplies that railway locomotives had no fuel to run on. ...read more.

Before long, people were going hungry. Some began to starve. To complete the farming crisis, the weather in 1960 was even worse than in 1959. The bad weather, combined with the anarchy caused by the Great Leap forward, reduced the harvest to 144 million tonnes. This led to a major famine, killing around 9 million people in 1960 alone. The government set up a rationing system under which most people were given a maximum of 125 grams of grain a day, but the death toll continued to rise. Between 1959 and 1962 some 20 million Chinese died of starvation and related diseases. In 1959 Mao Zelong admitted that the great leap forward had failed in a speech to the party leaders. The three bitter years or as the Chinese called them the famine years of 1959-61, were partly the result of Mao Zelong's great leap forward policies. Of course some party leaders blamed Mao personally for what had happened, and demanded his resignation. ...read more.

And although the moderates did not allow him a say in running the economy, he continued to have great influence over the masses of the people. He used this influence in 1966 to rid of the moderates by starting a new political revolution that would soon be known throughout the world as the Cultural Revolution. So Mao Zelong's great plans for china had failed, he was not head of state anymore but the people's liberation army of four million men supported him, all the ranks had been abolished so the soldiers were equal. Each soldiers was given a copy of the newly published book 'quotations from Chairman Mao Zedong', or mostly known as 'the little red book' and were then ordered to study it. So even though nobody I the government supported his ideas the peoples liberation army did. So in conclusion Maos plans for china did not work out as well as he thought they would, maybe his plans would have worked better if he had foreseen what mistakes he was making and the outcome of his actions. ...read more.