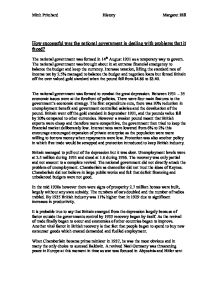 How successful was the national government in dealing with problems that it faced?

Protection was also another policy in which free trade would be scrapped and protection introduced to keep British industry. Britain managed to pull out of the depression but it was slow. Unemployment levels were at 2.5 million during 1931 and stood at 1.6 during 1936. The recovery was only partial and not amount to a complete revival. The national government did not directly attack the problem of unemployment. Chamberlain as chancellor did not trust the ideas of Keynes. Chamberlain did not believe in large public works and felt that deficit financing and unbalanced budgets were not good. In the mid 1930s however there were signs of prosperity 2.7 million homes were built, largely without any state subsidy. ...read more.

Another vital factor in British recovery is that fact that people began to spend to buy new consumer goods which created demanded and fuelled employment. When Chamberlain became prime minister in 1937, he was the most obvious and in many the only choice to succeed Baldwin. A revived Nazi Germany was threatening peace in Europe at this moment in time as war was focused in Abyssinia and Hitler sent troops into the Rhineland. Hitler had also let it know that he want re-unification with Austria and the incorporation of Germans in Germany, including those in Czechoslovakia and Poland. Under Chamberlain, Britain's policy was appeasement, in attempt to satisfy Hitler's aspirations and avoid a conflict, this was also MacDonald's and Baldwin's aim but Chamberlain pursued it much more actively. ?? ?? ?? ?? Minh Pritchard History Margaret Hill ...read more.