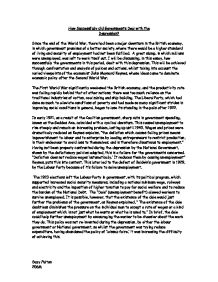 How Successfully did Governments Deal with the Depression?

How Successfully did Governments Deal with the Depression? Since the end of the World War, there had been a major downturn in the British economy, in which government promises of a better society, where there would be a higher standard of living and security of employment had not been fulfilled. A great slump, in which millions were unemployed, was left to work itself out. I will be discussing, in this essay, how successfully the governments in this period, dealt with this depression. This will be achieved through confrontation and analysis of polices and actions, whilst taking into account the varied viewpoints of the economist John Maynard Keynes, whose ideas came to dominate economic policy after the Second World War. The First World War significantly weakened the British economy, and the productivity rate was falling rapidly behind that of other nations; there was too much reliance on the traditional industries of cotton, coal mining and ship building. The Liberal Party, which had done so much to alleviate conditions of poverty and had made so many significant strides in improving social conditions in general, began to lose its standing in the polls after 1922. In early 1921, as a result of the Coalition government, sharp cuts in government spending, known as the Geddes Axe, coincided with a cyclical downturn. ...read more.

In 1925 the decision to return to the gold standard, implicated by Churchill, the Chancellor of the Exchequer further damaged Britain's economy. "By the return to the gold standard in 1925 at an unsuitable parity the Bank had set itself a problem of adjustment so difficult as to be well-nigh impossible" Keynes. Through the restoration of the gold standard, although Keynes believed this to be a very middle course, logical resolution to aid in balancing the budget deficit, he thought, " the inevitable price of this temporary ease was the accumulation of a heavy burden of short term liabilities. " Sooner or later, for good reasons or for bad, some loss in confidence might arise and then the insecure structure would tumble. This gave a disincentive to buying British as the pound had been devalued, and led to the growing tendency for British goods to be priced out of the market, increasing the effects of the depression in the 1930's. However, after the Wall Street Crash in 1929, and the failure of the gold standard, Britain left it for good in 1931 and Sterling became a managed currency. This was a considerable success for the National government and showed diligence to the people, promising further adjustment until the depression was alleviated. ...read more.

A building boom followed the increase in population that made new health measures possible. Newer industries such as automobiles, electrical manufactures, and chemicals replaced the older, traditional ones. There were also changes made in the relationship of Britain to her colonies. In the late 1930's Britain's foreign policy stagnated; there were too many problems to worry about at home. While domestic policies still had to find a way out of the unemployment mess, it was vainly hoped that the League of Nations would keep the peace, and while the aggressive moves by Germany, Italy and Japan may not have been totally ignored in Westminster, their implications were not fully grasped. Overall, although some of the policies employed by the governments were unsuccessful and furthered the effects of the depression, they set up success for later governments when these would be changed. Under the circumstances the governments had acted in the way that they thought best for the country, however, most policies failed to note the long-term effects they may suffer. Therefore the British governments, during the depression, were not too successful in dealing with the depression until later years when the old policies were withdrawn and what had to be done was accepted. In this respect, the later governments were perhaps more successful at dealing with the depression. Suzy Fulton 206M ...read more.