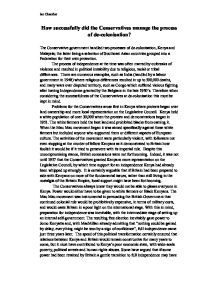 How successfully did the Conservatives manage the process of de-colonisation?

How successfully did the Conservatives manage the process of de-colonisation? The Conservative government handled two processes of de-colonisation, Kenya and Malaysia; the latter being a selection of Southeast Asian countries grouped into a Federation for their own protection. The process of independence at the time was often marred by outbreaks of violence and resulted in political instability due to religious, racial or tribal differences. There are numerous examples, such as India (handled by a labour government in 1948) where religious differences resulted in up to 500,000 deaths, and many wars over disputed territory, such as Congo which suffered vicious fighting after having Independence granted by the Belgians in the late 1950's. Therefore when considering the successfulness of the Conservatives at de-colonisation this must be kept in mind. Problems for the Conservatives arose first in Kenya where protests began over land ownership and more local representation on the Legislative Council. Kenya held a white population of over 30,000 when the protests and demonstrations began in 1951. The white farmers held the best land and prohibited blacks from owning it. ...read more.

With this in mind, preparation for independence was inevitable, with the intermediate stage of setting up an internal self-government. The resulting free election inevitably gave power to Jomo Kenyatta and, with MacMillan already admitting that "nothing could be gained by delay, everything might be won by a sign of confidence", full independence came just three years later. The speed of this political transformation certainly ensured that relations between Kenya and Britain would remain constructive for many years to come, but it must have contributed to Kenya's poor economic state, with wide-scale poverty, political arrests and human rights abuses. Some have argued that if some power had been retained by Britain a gentle transition to full independence may have caused less problems. For example, some assistance in the form of establishing a competent civil service, or the arrangement of favourable loans, might have given the newly independent Kenya some hope of avoiding the political and economic upheaval that occurred in the aftermath of independence. However, it should be emphasised that the Conservatives' concern lay not with the Kenyans or white farmers but instead with its world reputation. ...read more.

Britain sent troops to Malaya to protect its borders and, within three years, Indonesia had given up its territorial claims, although Singapore had by then left the Federation. As with Kenya, the Conservatives realised that Britain could no longer afford to protect its overseas colonies. As a secondary world power it could not stem the tide of communism - only the USA might have the military power to do so. In living up to its pledge to ensure the security of Malaya it acted with integrity and earned the respect of these post-independence colonial states. However, Britain realised that its trading future lay in Europe, even if it continued to maintain links in the Far East through the Commonwealth. An orderly withdrawal must surely have been better than a rout? In conclusion, the process of de-colonisation in Kenya and Malaya did not unduly damage Britain's international reputation. Although it often put its own interests first, whether military, strategic, or economic, before making any decision, it had to adjust to a changing world where Russia and the USA would be the new super powers and Britain would simply play a walk-on role. Ian Chandler ...read more.