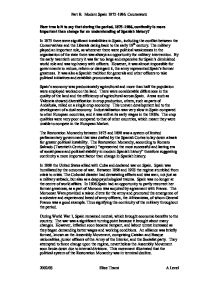 How true is it to say that during the period, 1875-1986, continuity is more important than change for an understanding of Spanish history?

How true is it to say that during the period, 1875-1986, continuity is more important than change for an understanding of Spanish history? In 1875 there were significant instabilities in Spain, including the conflict between the Conservatives and the Liberals dating back to the early 19th century. The military played an important role, as whenever there were political weaknesses in the organisation of the state there was always an opportunity for military intervention. By the early twentieth century it was far too large and expensive for Spain's diminished world role and was top heavy with officers. However, it was almost impossible for governments to reduce, reform or disregard it, the army represented Spain's former greatness. It was also a Spanish tradition for generals and other officers to take political initiatives and establish pronunciamentos. Spain's economy was predominately agricultural and more than half the population were employed worked on the land. There were considerable differences in the quality of the land and the efficiency of agricultural across Spain. Areas such as Valencia showed diversification in crop production, others, such as parts of Andalusia, relied on a single crop economy. ...read more.

UGT however his aim of creating political stability and the modernisation of the infrastructure failed due to lack of funding and corruption scandals. By failing to appease key opposition groups Primo's dictatorship came to an end when he realised he was more of a liability to the country. Primo's dictatorship demonstrates clearly all the divisive factors in Spain: regional resistance, conservative hostility to change, the existence of anarchists groups, the impact of Socialism, resistance to economic change. Above all the power of the Army was still apparent. The 1923 pronunciamento can be seen as a major turning point as it opened up a search for legitimate government that lasted half a century. Had a democratic constitution been restored in 1930, the monarchy might have just survived, but by 1931 it was too late. Support for a republic was increasing. The King left Spain suspending 'the use of his prerogative' instead of abdicating outright. The army refused to support Alfonso and the transition of power from monarchy to Republic was thus speedy and relatively smooth. The Left Republic, headed by Azana, brought about many different reforms. The Socialists became the single largest party. ...read more.

By early 1950s Spain was accepted back into the UN and hostility ended this opening to the world unleashed social and economic change, which drew Spain closer to Western Europe. Spain's growing prosperity did not end social and political unrest and many strikes were continuing during the late 1960s and early 1970s. Franco died in 1975 and so this year can be seen as a turning point as an era had ended and many Spaniards had known no other leader. From 1975-1986 Spain saw the transition to democracy. The new constitution effectively reversed the movement toward political centralization begun by Ferdinand and Isabella in the 15th Century, and Spain began to redefine itself as a nation of autonomous communities. President Adolfo Suarez introduced important political reforms. When he surprisingly dismissed in 1981, a group of militias tried to take the power with a coup, but failed. In 1982 the socialist party won the elections and Felipe Gonzalez became president of the government. Spain became member of the NATO in 1985 and entered the European Community in 1986. However, significant social issues remained unresolved. Suggesting that the post 1975 transition of democracy wasn't very different to the period before 1923, and continuity is more important than change for an understanding of Spanish history. {1509} Part B. Modern Spain 1875-1986. Coursework 2002/03 Elise Thami A Level ...read more.