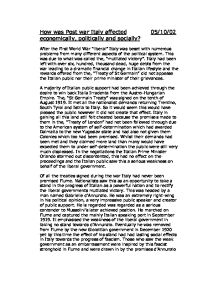 How was Post war Italy affected 05/10/02 economically, politically and socially? After the First World War "liberal" Italy was beset with numerous problems from many different aspects of the political system. This was due to what was called the, "mutilated victory". Italy had been left with over six, hundred, thousand dead, huge debts from the war leading to a dramatic financial change in Italian lifestyle and the rewards offered from the, "Treaty of St Germain" did not appease the Italian public nor their prime minister of their grievances. A majority of Italian public support had been achieved through the desire to win back Italia Irradenta from the Austro-Hungarian Empire. The, "St Germain Treaty" was signed on the tenth of August 1919. It met all the nationalist demands returning Trentino, South Tyrol and Istria to Italy. ...read more.

Nationalists saw this as an opportunity to take a stand in the progress of Italian as a powerful nation and to rectify the liberal governments mutilated victory. This was headed by a man named Gabrielle d'Annunzio. He was an extremely right-wing in his political opinion, a very impressive public speaker and creator of public support. He is regarded was regarded as a serious contender to Mussolini's later achieved position. He marched on Fiume and captured the mainly Italian speaking port in September 1919. It emphasised the weakness of the liberal government in taking no stand towards d'Annunzio. Eventually he was removed from Fiume by the new Giolottian government in December 1920 yet by this time the effect of his stand had had lasting social effects in Italy towards the progress of fascism. ...read more.

The industrial boom during the war years had finished and left Italian industry in recession. There was permanent inflation and many Italians struggled to maintain their lifestyle especially the self-employed petty bourgeoisie who could not demand any wage increases through a trade union and were left to fend for themselves. The government had taken loans from people during the war and in returning the money inflation had dramatically lowered it's value many were left feeling exploited. Post-Italy was under fire from all directions the threat of socialist revolt had risen; the government had weakened and again changed hands from Orlando to Giollotti. The economy had been left in tatters with over two million demobilised soldiers left unemployed, increases in inflation. The mutilated victory and its repercussions had caused social change amongst Italians now leaning far more towards fascism or socialism. Italy was a divided nation with a angry public force inside. Italy was heading for change it was just a matter of how and how long. ...read more.