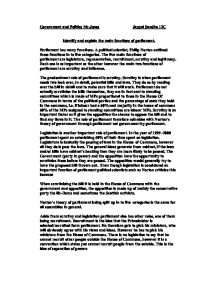 Identify and explain the main functions of parliament.

Government and Politics Mr.Jones Jaypal Sandhu 12C Identify and explain the main functions of parliament. Parliament has many functions. A political scientist, Philip Norton outlined these functions in to five categories. The five main functions of parliament are legislature, representation, recruitment, scrutiny and legitimacy. Each one is as important as the other however the main two functions of parliament are scrutiny and influence. The predominant role of parliament is scrutiny. Scrutiny is when parliament needs two look over, in detail, potential bills and laws. They do so by reading over the bill in detail and to make sure that it will work. Parliament do not actually scrutinise the bills themselves, they are in fact sent to standing committees which is made of MPs proportional to those in the House Of Commons in terms of the political parties and the percentage of seats they hold in the commons, i.e. if labour had a 60% seat majority in the house of commons 60% of the MPs assigned to standing committees are labour MPs. ...read more.

Norton's theory of parliament being split up in to five categories is the same for all assemblies in general. Aside from scrutiny and legislation parliament also has other roles, one of them being recruitment. Recruitment is the idea that the Primeinister is selected/recruited form parliament. He therefore gets to pick his ministers, who will obviously agree with his views and ideas. However he has to pick his ministers from the House of Commons. There is no legislation to say that he cannot recruit other people outside the House of Commons, however it is a convention whish states you cannot recruit people from the outside. This is the idea of separation of powers State power depends on legitimacy. The sovereign power of a state depends not only on its capacity to coerce; it also rests on the recognition by citizens has authority or right to exercise power over those who live there. This concept is commonly called legitimacy, the third of five major roles of parliament as stated by Philip Norton. ...read more.

Finally, the fifth major role of parliament is representation. Representation is the idea that a particular MP should govern each state/borough. The idea of representation is the notion that those who are governed should have the opportunity to be involved in the process of government. This is the idea that the public have more of a say on how government is run and have more of a relationship with its government if they have their own representative from government who will represent them and their beliefs. On Fridays each MP have the day off to talk to constituents. In conclusion Norton outlines the 5 major roles of parliament, which are; legitimacy, scrutiny, representation, recruitment and legislation. These five different categories apply for all assemblies on general. Norton's idea of parliament coincides with the concept of government through parliament not government by parliament. Although parliament as a whole is extremely important, perhaps its most significant role is scrutiny as this is where bills are either passed or thrown out, which also links to legislation, therefore the majority of parliament time is spent on scrutiny and legislation. ...read more.