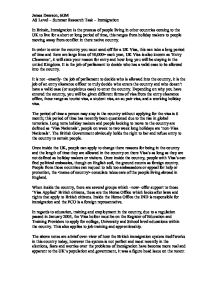 In Britain, Immigration is the process of people living in other countries coming to the UK to live for a short or long period

In Britain, Immigration is the process of people living in other countries coming to the UK to live for a short or long period of time, this ranges from holiday makers to people moving away from conflict in there native country. In order to enter the country you must send-off for a UK Visa, this can take a long period of time and there are large lines of 50,000+ each year, UK Visa is also known as 'Entry Clearance', it will state your reason for entry and how long you will be staying in the untied Kingdom. It is the job of parliament to decide who has a valid case to be allowed into the country. It is not -exactly- the job of parliament to decide who is allowed into the country, it is the job of an entry clearance officer to truly decide who enters the country and who doesn't have a valid case (or suspicious case) to enter the country. Depending on why you have entered the country, you will be given different forms of visa from the entry clearance office, these range as tourist visa, a student visa, an au pair visa, and a working holiday visa. The period of time a person may stay in the country without applying for the visa is 6 month; this period of time has recently been questioned due to the rise in global terrorism. ...read more.

the least and I supported the idea that -action- must be taken as there are real problems not being recognized currently with the System. The system of other parties such as the BNP that has flabbergasted the masses on the other hand are racist and in the wide perspective behind in modern thinking as it is now a very unlawful thing to be racist, for the good. The current 'issues' with the immigration system are as follows; * getting permission to stay in the UK longer than you originally intended * getting permission to do something which you are not at present allowed to do, for example, being allowed to work * bringing relatives into the country, for example, a spouse, fianc�(e), children * being threatened with deportation from the UK * being held by the immigration authorities in a detention centre * wanting a passport and not knowing whether you are entitled to a British passport or some other passport * wanting to apply to become a British Citizen * if you are already living in the UK but wanting to travel (for example, for a holiday), whether you will be allowed back into the UK * whether you are entitled to use state services or claim benefits, for example, education, health services, council housing, social security benefits, housing benefits, council tax benefit * the ...read more.

A town community is now very often divided by religion, 'Christian', 'Muslim' etc. As well as this, there is a lot of fear over Crime and terrorism, in other countries it is -true- due to the lack of money the countries have due to loans from the west, the crime rate is higher, crime is more common and the people that come into the country could very well 'resort to crime' as it was a norm 'back home'. There is not enough done by the Government to again, involve migrants with the communities and teach them British ways, this would also -reduce- racial tensions, and the 'positive view of England' may rise in the middle east creating better foreign relations and cutting -down- on terrorist activity and popularizing. To finish, Immigration is a delicate matter, and cannot simply be solved through quota's, good on the Conservatives for at least trying to -change- things, but the several factions including community building, religion, ways of life, terrorism etc. must be all considered and dealt with as they are all inter-twined with immigration, controls must be put on and other countries in Europe that currently do not take in as many migrants as us, but criticize us for not taking any in due to our relations with the USA. (USA = Unpopular politically) ?? ?? ?? ?? James Dawson, 6GM AS Level - Summer Research Task - Immigration ...read more.