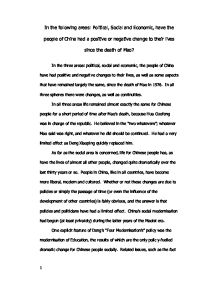 In the following areas: Political, Social and Economic, have the people of China had a positive or negative change to their lives since the death of Mao?

In the following areas: Political, Social and Economic, have the people of China had a positive or negative change to their lives since the death of Mao? In the three areas: political, social and economic, the people of China have had positive and negative changes to their lives, as well as some aspects that have remained largely the same, since the death of Mao in 1976. In all three spheres there were changes, as well as continuities. In all three areas life remained almost exactly the same for Chinese people for a short period of time after Mao's death, because Hua Guofeng was in charge of the republic. He believed in the "two whatevers"; whatever Mao said was right, and whatever he did should be continued. He had a very limited effect as Deng Xiaoping quickly replaced him. As far as the social area is concerned, life for Chinese people has, as have the lives of almost all other people, changed quite dramatically over the last thirty years or so. People in China, like in all countries, have become more liberal, modern and cultured. ...read more.

A harsh crackdown, which led to many billposters being prosecuted, silenced many of those in favour of "the fifth modernisation" (democracy) and some of those who were not necessarily campaigning for democracy, merely political reform, for a while. In the coming years, Deng undertook a campaign of ruthless suppression of all manner of political opposition, which is very reminiscent of the Mao years (hence in this area there was continuity). The Tiananmen Square incident in June 1989 typified the lack of progress that China had made in the area of political reform. Students who had been voicing their desire for liberties and democracy were forced from the square in a bloodbath. Deng, who had, some 13 years earlier, supported similar protests because they were of an advantage to him, had almost certainly given the final order. When the "gang of four" were arrested in 1976 and put on trial in 1980, largely for the crime of being responsible for the Cultural Revolution, it was truly Mao's policies were on trial. This did not truly represent a political change, because it was merely an old rival hitting back. ...read more.

Many rural people, however, suffered because they needed children to help them work the land. Many went ahead and had many children, and then suffered further due to the harsh penalties imposed on families with multiple children. The relaxation of economic controls by the government has continued steadily since 1976 and the economy has boomed. It is predicted that by 2020 China will overtake the USA as the world's superpower. China's economic output has grown at an average rate of 10% per annum since 1976. China's gross domestic product has risen from approximately $150 billion in 1980 to $800 billion in 2000, with growth up to $2200 billion forecast by 2015. There is no doubt that the lives of Chinese people have improved, in the economic sphere, dramatically since 1976. From being largely poor peasants the country's people have become fully-fledged citizens of the new, modern world. A measure of individual people's economic prosperity is how much energy they consume. From 18 million Btu per capita in 1980, energy consumption has risen steadily to 35 million Btu per capita in 20001. It seems that, since Mao's death, China has made great leaps forward in all spheres of life, particularly economically. The people of China have definitely been better off economically and socially but politically, little has improved. 1 ...read more.