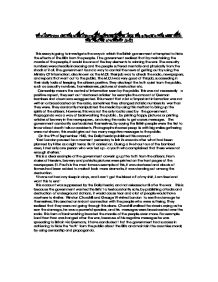 In what ways did the British government attempt to hide the effects of the Blitz from the people of Britain? (643)

Propaganda was a way of brainwashing the public, by printing happy pictures or printing articles of bravery in the newspapers, and using the radio to get across messages. The government constantly contradicted themselves, by saying the British people were the first to know about death tolls or accidents. Photographs showed people with big smiles gathering were not shown; this would give out too many negative messages to the public. On the 9th of September 1940, the Daily Herald published this account; 'East London paused for a moment yesterday to lick its wounds after what had been planned by Hitler as a right terror. But it carried on. During a five hour tour of the bombed area, I met only one person who was fed up- a youth who complained that there were not enough shelters.' ...read more.

Winston Churchill and George VI visited London to see the damage for themselves; this created an instant connection with the people who were suffering. They realized that they were not going through this alone. Churchill walked the streets crying as he saw the damage, he was a powerful speaker, and his messages were broadcasted over the radio. This form of brainwashing boosted the morale of the people even more. For example Lord Haw Haw was hanged after the war, because of his negative messages he was spreading to Britain via Germany. I have concluded that the government had success in achieving to hide the 'truth' form the public about the Blitz and maintain the countries moral; by using censorship and propaganda. ...read more.