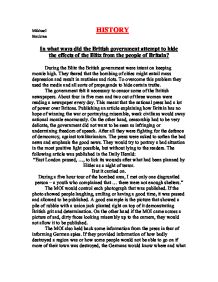 In what ways did the British government attempt to hidethe effects of the Blitz from the people of Britain?

Mikhael HISTORY Boukraa In what ways did the British government attempt to hide the effects of the Blitz from the people of Britain? During the Blitz the British government were intent on keeping morale high. They feared that the bombing of cities might entail mass depression and result in mutinies and riots. To overcome this problem they used the media and all sorts of propaganda to hide certain truths. The government felt it necessary to censor some of the British newspapers. About four in five men and two out of three women were reading a newspaper every day. This meant that the national press had a lot of power over Britons. Publishing an article explaining how Britain has no hope of winning the war or portraying miserable, weak civilians would sway national morale enormously. On the other hand, censorship had to be very delicate, the government did not want to be seen as infringing or undermining freedom of speech. After all they were fighting for the defence of democracy, against totalitarianism. The press were asked to soften the bad news and emphasis the good news. They would try to portray a bad situation in the most positive light possible, but without lying to the readers. ...read more.

This would surely have not demoralized its readers, everyone is allowed to criticise the government. But the prime minister did not like these attacks on the government and sent a formal note of warning to the paper. If it did not cease to print these pejorative articles, the paper would have to be shut down. Churchill did have reason to be worried about the paper; it was a national paper and had a circulation of about 1.9 million. It was also the paper of the citizen soldier, providing a voice for the massed ranks of conscripts through readers' letters and a forces column. Churchill must have thought that if this paper was influencing so many of the British people and blaming the government and military officials for a number of blunders, these people would be discontent with the government. Soldiers might disagree with the officials' decisions and in all this could damage the war effort. What the government did control was the BBC. During the war, television was no longer broadcast but the radio was kept going. The MOI and the BBC worked well together and cooperated closely. Ministers had final authority over broadcasting policy and controlled the amount of political statements and news coverage aired. ...read more.

Most of the films were made to build up national morale; they told stories of soldiers and their families fighting through hardships, for example "Henry V". The news they showed was selective and never showed anything that could demoralise the viewers. It would show the war from the MOI's point of view which might not necessarily be the whole truth. The MOI's short films were far less popular as the people didn't want to listen to the ceaseless stream of propaganda, advice and instructions. Many liked the documentaries shown. These were films shot at the battlefield reporting first hand the progress of the war effort such as "Christmas under fire" and "Britain can take it". The government did not only use the media to hide the effects of the Blitz from its people, volunteers were recruited following bombings to remove debris, rubble and dead bodies from sight. Services were restored as quickly as possible so people could go about their lives as usual. In conclusion, the government tried to bend and hide the full impact of the Blitz using many different methods, mainly the press, the radio and cinema. They tried not to lie to their people but used 'white lies to hide certain truths. But all of this was done for the benefit of the country and the British war effort. ...read more.