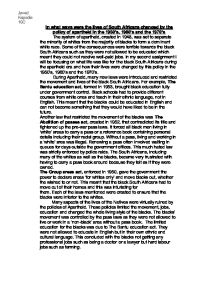 In what ways were the lives of South Africans changed by the policy of apartheid in the 1950's, 1960's and the 1970's The system of apartheid, created in 1948, was set to separate the minority of whites from the majority of blacks to form a dominant white race. Some of the consequences were terrible towards the black South Africans such as they were not allowed to be educated which meant they could not receive well-paid jobs. In my second assignment I will be focusing on what life was like for the black South Africans during the apartheid era and how their lives were changed by this policy in the 1950's, 1960's and the 1970's. During Apartheid, many new laws were introduced and restricted the movement and lives of the black South Africans. For example, The Bantu education act, formed in 1953, brought black education fully under government control. Black schools had to provide different courses from white ones and teach in their ethnic language, not in English. This meant that the blacks could be educated in English and can not become something that they would have liked to be in the future. Another law that restricted the movement of the blacks was The Abolition of passes act, created in 1952, that contradicted its title and tightened up the pre-war pass laws. ...read more.

Few local employment opportunities were available. Their single most important home-grown source of revenue was the provision of casinos and topless revue shows, which the National Party government had prohibited in South Africa proper as being "immoral". However, the homelands were only kept afloat by massive subsidies from the South African government; for instance, by 1985 in Transkei, 85% of the homeland's income came from direct transfer payments from Pretoria. The Bantustans' governments were invariably corrupt and little wealth trickled down to the local populations, who were forced to seek employment as so-called "guest workers" in South Africa proper. Millions of people had to work in often appalling conditions, away from their homes for months at a time. For example, 65% of Bophuthatswana's population worked outside the 'homeland'. Not surprisingly, the homelands were extremely unpopular among the urban black population, many of whom lived in squalor in slum housing. Their working conditions were often equally poor, as they were denied any significant rights or protections in South Africa proper. The allocation of individuals to specific homelands was often quite arbitrary. Many individuals assigned to homelands did not live in or originate from the homelands to which they were assigned, and the division into designated ethnic groups often took place on an arbitrary basis, particularly in the case of people of mixed ethnic ancestry. ...read more.