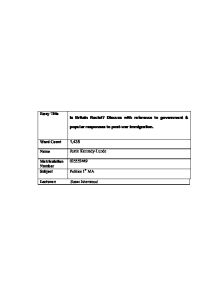 Essay Title Is Britain Racist? Discuss with reference to government & popular responses to post-war immigration. Word Count 1,435 Name Justin Kennedy-Lunde Matriculation Number 025552449 Subject Politics 1st MA Lecturer: Susan Isherwood Is Britain Racist? Discuss with reference to government & popular responses to post-war immigration. Britain emerged from the Second World War with a labour shortage. In 1944 a Royal Commission was established to assess the population of Great Britain. The commission returned its findings in 1949 recommending that extra labour was needed. The "European Volunteer Workers Scheme" was introduced. Its aim was to entice workers from Europe to come to Britain. Between 1947 and 1948 17,000 workers came to Britain under the scheme. However the Irish were the largest ethnic group the time, followed by continental Europeans. Blacks only made up 5% of the 17,000 who came, although they were more conspicuous by the colour of their skin and also the language and cultural differences. Yet still there was tension amongst the population with race riots. In Notting Hill in 1958 race riots went on for five nights over an August bank holiday weekend. There were also severe riots in Nottingham in the same year. In the 1950s Britain had used informal immigration control methods as the government was desperate to maintain good relations with Commonwealth countries. ...read more.

There was also a marked increase in what is now known as "Hate Crimes" perpetrated by white youths on the black population. Political parties also sensed the public mood regarding immigration and racism and were quick to find that this could help them in elections. The most blatant and disturbing of all examples was in the 1964 Smethwick by-elections where a traditionally safe Labour seat was won by a Conservative MP with the election slogan "If you want a nigger for a neighbour vote Labour". This was a decisive sign of racism, more than the hate crimes and riots. This was an election and by definition; a representative majority made its views known. The Conservatives played on public paranoia and xenophobia and used it to gain themselves an extra 40 points in opinion polls between 1966 and 1970 while Labour appeared soft on the immigration issue. Enoch Powel, an MP during the 1960's, was vehemently opposed to the influx of Jamaicans into Britain. His reasoning was that he wanted to ensure the survival of the British way of life. He was swiftly dispatched from his position in the shadow cabinet for comments such as "rivers of blood" would flow from the racial violence caused by black immigrants. ...read more.

he was a member of the shadow cabinet, the opposition party's proposed replacement for government if they win a general election. As to whether or not Britain is racist in comparison to other countries is a separate question. Germany had the persecution of the Jews, Gypsies, and any other minority group that wasn't blond haired and blue eyed under the Nazis, so pre-war; they really set the bar as to levels of racism. France had a similar post-war labour shortage as Britain and turned to its former colonies to fill the gaps in the economy. As a result, France still has major issues regarding racism to this day as indicated by Jean Marie Le Pen's second place in the first round of the French presidential elections. This caused shock waves around Europe but France wasn't the first country to show its far right leanings. Joerg Haider's Freedom Party shares power in government in Austria. And last but not least, who can forget the British National Party winning 5 council seats in local elections. It has been argued that the BNP is picking up disenfranchised far right, traditionally Conservative voters but the parties xenophobic views are still being chosen at the ballot box. Britain was previously an overtly racist country but now seems like a country struggling to reconcile its right wing tendencies with a more modern and accepting outlook as reflected in modern racial equality and discrimination laws. ...read more.